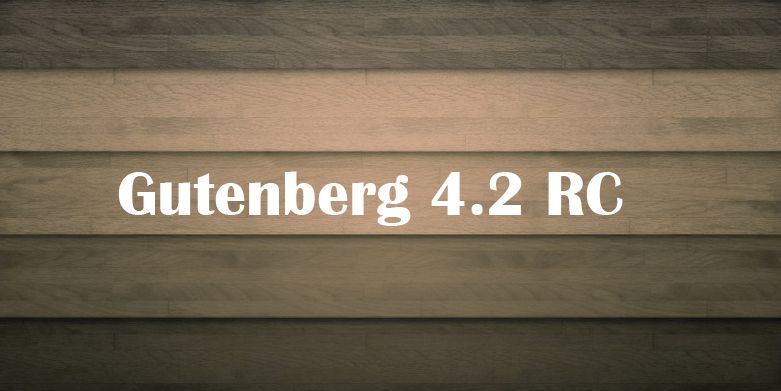 Gutenberg 4.2 RC – the newest version of Gutenberg has been released with new features and improvements. The new update was released on October 31, 2018, with several interesting enhancements in it.

Note that the 4.2 update is at the Release Candidate stage. You can grab the package here.

Gutenberg 4.2 has included many fixes, refinements, performance improvements and other updates for a better user experience and it has also introduced different layers of APIs. It has introduced the Formatting API for extending RichText, enhanced inserter between blocks, support for displaying icons, updated block descriptions, and more.

Let’s have a quick look at the notable changes in version 4.2.

The new version has also concluded the cycle for the formatting API to extend Rich Text Components that allow you to extend its controls effortlessly.

Gutenberg 4.2 has introduced an enhanced block inserter that displays the full inserter when clicking the + button in between the blocks. It is the same Inserter menu which appears in the header toolbar. Prior to this change, clicking the inserter would add a new empty paragraph block.

Good news for Plugin developers! They can also now register their own block categories and supply them with an icon for better clarity in the block library list.

Other Notable Changes in Gutenberg 4.2.

The Gutenberg Editor is getting better with each updated version since it is getting closer to its final release in WordPress 5.0. Also, the developers are vastly enhancing the features to make it as easier as possible for users to use the editor with each update. Furthermore, Gutenberg has been introduced as the default editor in the recent WordPress 5.0 Beta 1 release. If you haven’t tested it yet, we suggest you give it a try right away.