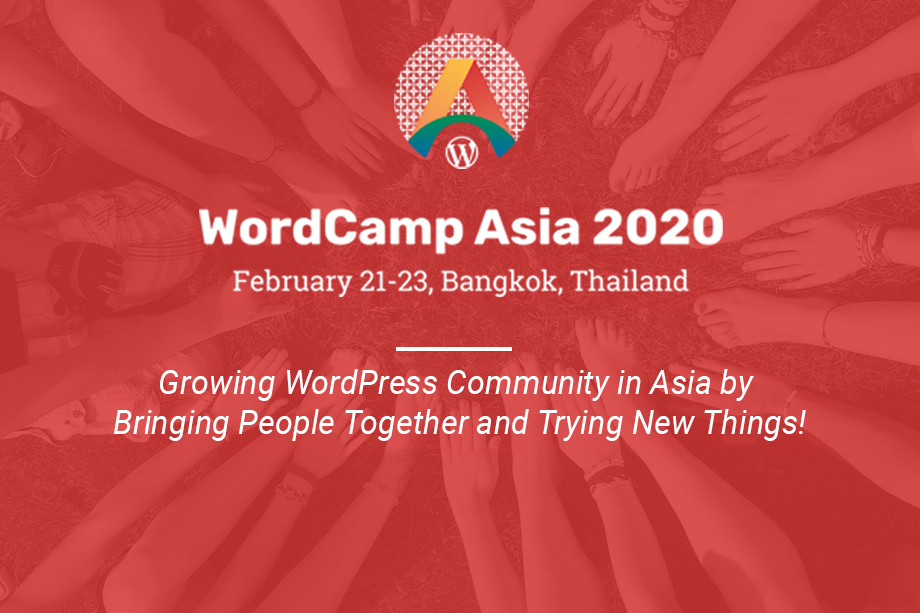 The organizers of WordCamp Asia 2020 are expecting more than 1,000 WordPress bloggers, developers, designers, entrepreneurs, marketers, and enthusiasts to attend the three-day event, scheduled for February 21-23, 2020 at TRUE ICON HALL @ ICONSIAM. WordCamp Asia 2020 is Asia’s first flagship WordCamp, and overall third flagship WordCamp, after WordCamp Europe and WordCamp US. To mark this important milestone, Matt Mullenweg, co-founder of WordPress, will present the keynote address.

The event will start off with a Contributor Day on February 21, followed by two days of official conference on February 22-23. On these two days, attendees can expect dozens of talks from various WordPress experts from around the world split into two conference tracks. Various opportunities to network and collaborate will be available for attendees, considering that the event has attracted many WordPress enthusiasts from all kinds of industry and background. The event will also feature booths from more than 20 sponsors that the attendees can visit and interact with. At the end of the 3-day event, WordCamp Asia 2020 will close with an after-party, as per the traditions of WordCamps.

WordPress has a huge following in Asia. Over the years, the region has amassed over 127 WordPress Meetup Chapters across 23 countries with over 73,000 members and held more than 150 WordCamps in 52 cities across 18 countries. This number continues to grow, as more Meetup Chapters and WordCamps continue to form in the region. It is not an exaggeration to say that WordCamp Asia 2020 has been a long-awaited event by the WordPress community in Asia. The support received from the community so far has been very encouraging; the various call for speakers, sponsors, and volunteers have been met with enthusiastic responses. In addition to that, the first batch of 200 tickets was sold in less than 48 hours.  As Asia’s first flagship WordCamp,​ ​WordCamp Asia 2020 is envisioned to be a welcoming, nurturing, and experimental event, as described by the Global Lead Organizer, Naoko Takano.

She was quoted saying: “We are really excited to be working on creating a place where community members can learn from and get inspired by each other”. Part of the vision is reflected in the organizing team composition, which is made up of 42 members from 16 Asian countries. The organizing team works almost entirely online, although some of the members have met in person during recent WordCamps in Germany, Singapore, and the Philippines. There are also plans by some of the organizers to meet up during the upcoming WordCamp Tokyo and WordCamp US.  The vision is also reflected in the​ ​newly-launched WordCamp Asia 2020 logo. “The logo represents the unique diversity of Asia, considering that each Asian country has its own distinct culture, language, writing system and colors!” , WordCamp Asia 2020 Local Lead organizer Nok has said.

The success of WordCamp Asia 2020 lies in the hand of the Asian WordPress community. Be it as a Media Partner, Speaker, Sponsor, Volunteer or Wapuu Designer, the organizing team encourages the community to share the word and invite their peers and colleagues to the event, to ensure that WordCamp Asia 2020 will be a memorable and inspiring event for all.

WordCamps are informal, community-organized events that are put together by WordPress users. WordCamp Asia 2020 is an event put together by the WordPress community in Asia. The organizers were recruited in April 2019 and they had their first online meeting in May 2019. The majority of the organizers have been involved in local WordCamps as a lead organizer or team members. WordCamp Asia social media platforms were launched in June 2019 and the teaser site was live in July 2019.

The official hashtag for this event is #WCAsia.