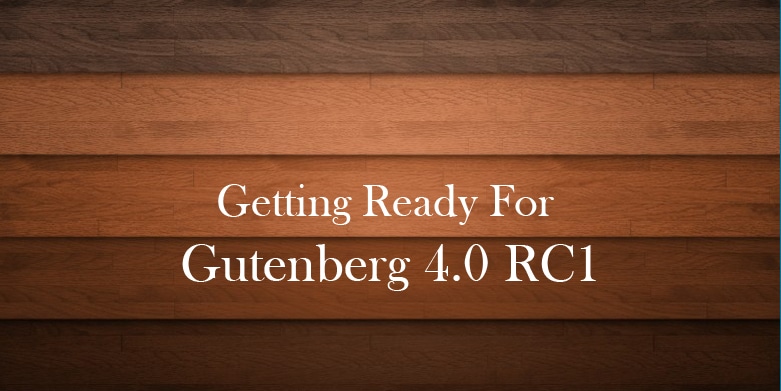 A general update on the upcoming release of Gutenberg 4.0 RC1 was published by Matias Ventura, technical lead for the Gutenberg project, yesterday. The post was to update users on what to expect on the next release of the editor.

Ventura outlined a number of tasks that have been completed up to this point. These include features like Full Screen, Unified Toolbar, and Spotlight modes to adapt to a user’s creative preferences, adaptive design, autosave support, and more.

The post actually provides a quick detailed recap of the progress that’s been made since early 2017. Due to the “Try Gutenberg” callout in WordPress 4.9.8 and the editor slowly making its way to sites on WordPress.com, the team has received a lot of feedback leading to improved iterations. It has also crossed its ultimate goal of 100K active installations.

According to Matias Ventura’s post, “The main feature set targeted for the first version of the editor has been considered complete for a few releases now. Since then, however, a large amount of testing being carried and the great feedback coming from multiple venues has resulted in several further iterations and additions to continue to improve the overall experience to wider satisfaction.”

“This includes things like editor modes and tweaks to the inserter, transformation, and toolbar mechanisms. That has pushed us back a little in being able to fully focus on bug fixing.”

Check out the full list of enhancement that has been done till now and the tweaks that will be included in the 40th release of the editor – Gutenberg 4.0.

Gutenberg 4.0 will initially be a release candidate that will be made available in the next few days.

1 thought on “A Quick Update On the Upcoming Gutenberg 4.0 RC1”