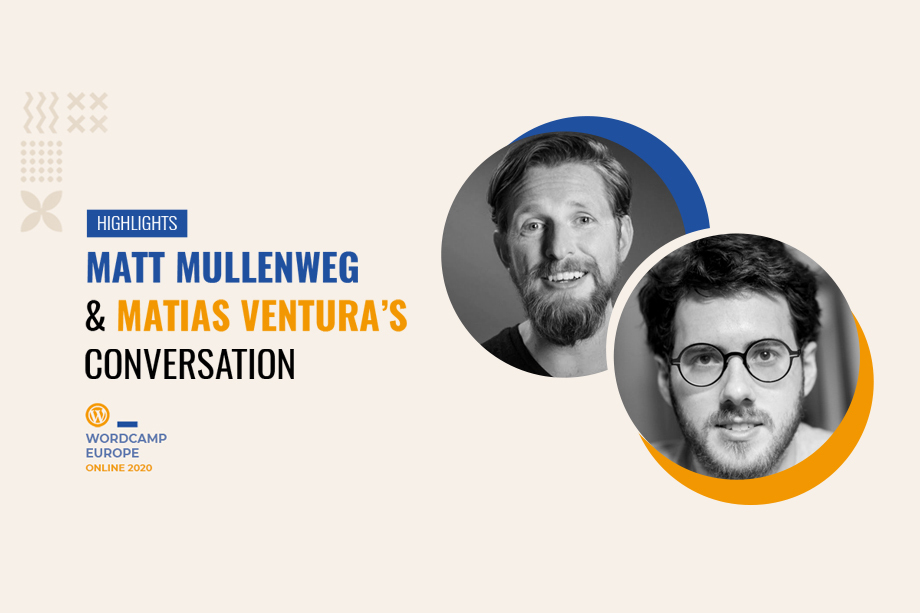 The biggest online WordPress conference, WordCamp Europe 2020 took place last week from June 4 to 6, 2020. It concluded with resounding success. You can read more about what went down at WCEU2020 in our previous article. Every session that took place was impressive and informative. We got to learn a lot and we’re sure everyone feels the same. One of the major highlights of WCEU2020 was the conversation with Matt Mullenweg, the founder of WordPress. Matt was joined by Matias Ventura. It was an hour-long inspiring conversation. They discussed what’s coming into WordPress in the future. The conversation mostly focused on the new features and updates in the upcoming Gutenberg updates and WordPress 5.5. Both of them also had a 40-minute long Q/A session, where they answered questions from other WordPressers. 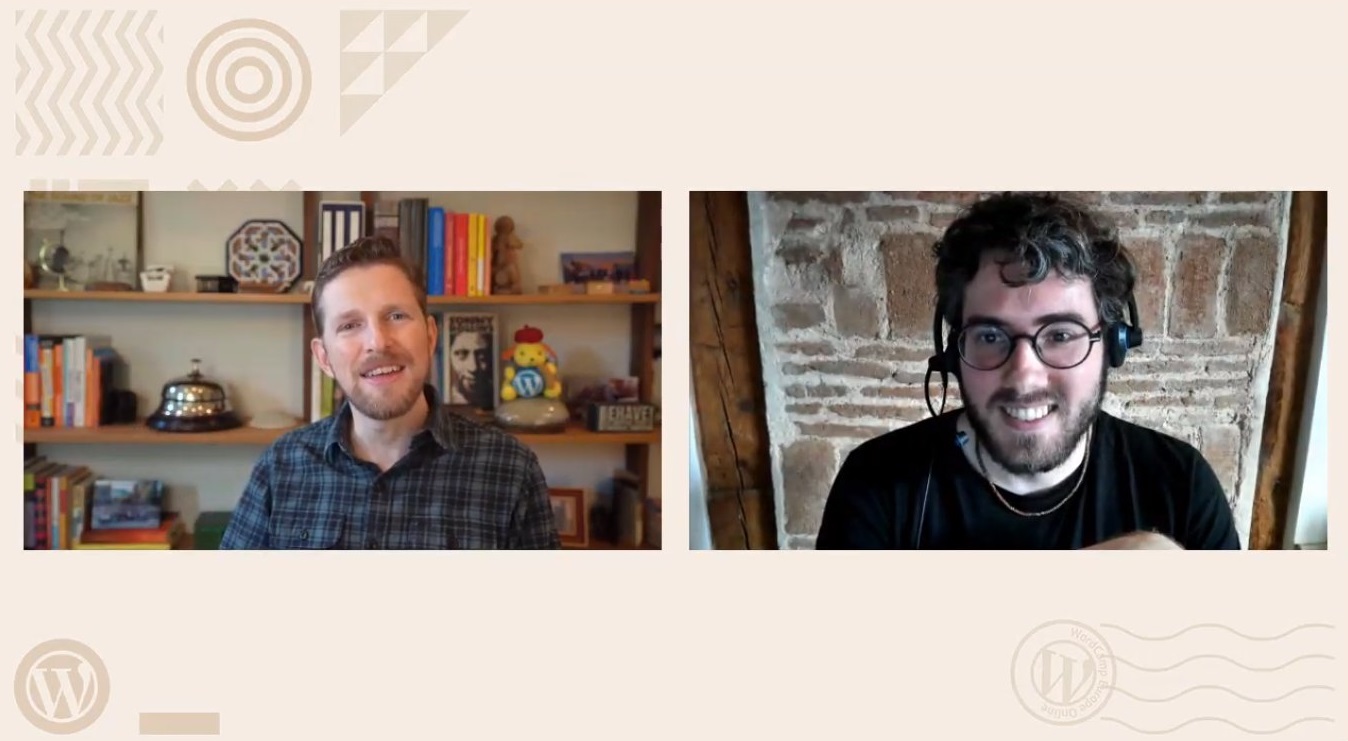 The conversation between Matt and Matias was very interesting to watch as they talked about all the upcoming features with an extensive demo, WordPress’ current stats, market position and competition, more Gutenberg enhancements, and more. In this article, we will swiftly have a look at all the topics they discussed at the WCEU2020 conference. 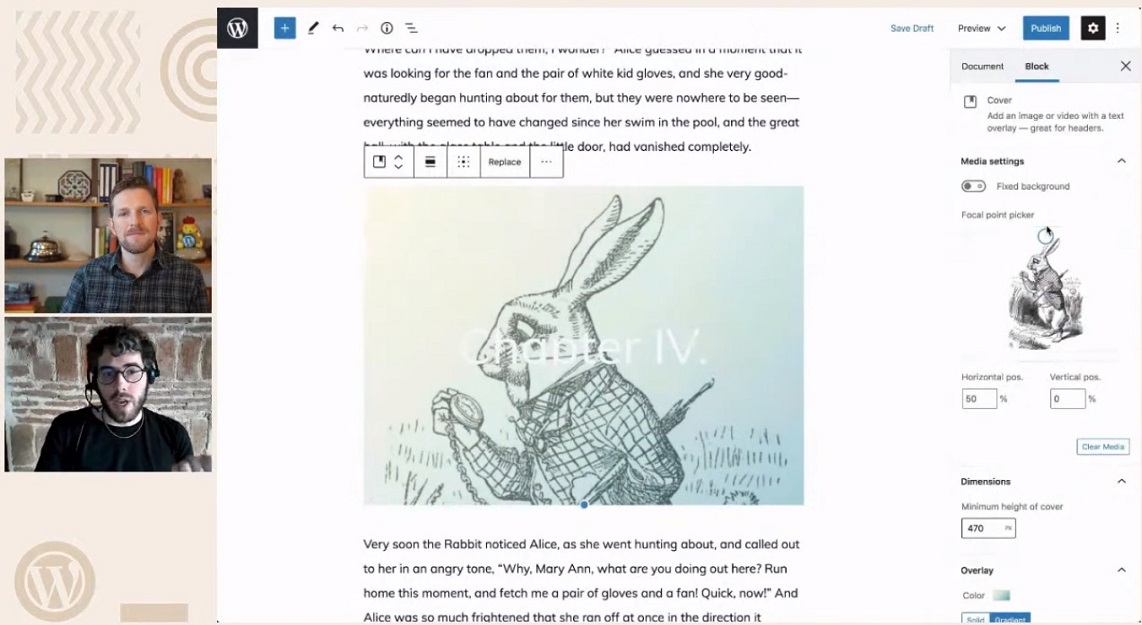 As we mentioned earlier, Matias provided everyone with an extensive Gutenberg Demo where he showed all the new cool features that we’re likely to see in the upcoming Gutenberg editor updates. There were many new block enhancements and also some easy image editing tools. The new image manipulation tools allow you to rotate, flip, and crop images inside the block. These features will be available first in the next Gutenberg Plugin update and then later in WordPress 5.5.

In the conversation, Matias also highlighted some of the features that will be landing in the upcoming WordPress 5.5 release. The new features will include Gutenberg Enhancements, Auto Updates for Themes and Plugin, Lazy Loading for Images, Site-Health Mechanisms, and more. With this announcement, we’re now even more excited for the next update.

Matt Mullenweg confirmed that there are currently over 45 million sites that write in Gutenberg. More than 92 million posts have been made using the Gutenberg Editor. He also claimed that the number of posts made with Gutenberg might reach a hundred million by the time WordPress 5.5 comes out. Massive!

Rise in eCommerce and websites during this pandemic

Matt stated, “In some places, we’re getting 20, 30% employment, which is a big, big economic risk to people. That said, e-Commerce and websites are growing. We’ve seen a huge boost on both. 20, 30, 40% year over year, and some things doubling year over year.”

“So, if we can help people through working with WordPress Core, working on plugins or whatever, and get better at WooCommerce, WordPress, or all of the things built on top of WordPress, I think that could actually provide a lot of economic opportunity for people, for whom the normal jobs might be in shaky territory.”

So, according to Matt, we need to focus on crafting new products and services that will help people with normal jobs to benefit from this platform. These statements from Matt has definitely inspired our WordPress developers to garner new ideas for eCommerce platforms and other crucial site tools.

WordPress in a monopolistic position?

The Q/A session also featured a question where it was asked if WordPress is a monopoly and if lack of competition was a good thing. To this Matt enlightened us all with all the competitions we have in the market share and how they are leveling up. He shared every aspect that makes WordPress a wonderful platform that anyone can use.

Matt said, “The beautiful thing about open source projects is they can have a flywheel. A flywheel is like a really large, heavy stone or wheel. Something that is hard to get started; you need to push really hard. But once it gets started, it has a ton of angular momentum and stored potential energy. Once it’s going, it’s difficult to stop.”

“It’s actually really good for humanity and society when those things happen because instead of a lot of wasted effort on duplicative solutions, we’re able to work together to make one thing that is best for everyone.”

We all are familiar with the fact that WordPress is the most popular CMS with a 37% market share. With the position it holds currently, Matt feels really proud and shares that WordPress belongs to all.

A paywall block lets you gate content behind a subscription without coding or any custom templates. It is the easiest way to put some content in front of the paywall and also some conduct behind the paywall. Prior to this block, one needed to write PHP to efficiently do that. Thanks to the blocks!

Advice for Freelancers and Agencies

“As WordPress is getting user-friendlier day by day, could freelancers and agencies possibly in danger?” The question was something like this. To this, both Matt and Matias concurred that when something grows bigger with easier solutions, the opportunities only grow successively.

A piece of advice from Matt to all freelancers was that freelancers and agencies should focus on recreating stuff that should be easy and truly unique. They should use WordPress as a platform to build an application on top of it.

Another excellent advice from Matt was “Think about where the value’s going to be in the future. If in 10 years anyone can click and build a customized site, like then what becomes really valuable? Is it getting visitors to that site? Is it custom functionality? Is it turning that site into an app? I don’t know what it is but think about that. Start to learn those skills, including JavaScript.”

So these were a few highlights from Matt Mullenweg and Matias Ventura’s conversation at WordCamp Europe 2020. Not only these, but they also talked about the image APIs in Gutenberg, how to keep your site from breaking, HTML in Gutenberg, Shopify’s growth, and many more.

Here is a quick link to the first day of the WCEU2020 Online video. You can skip to 4.30.00 mark to directly watch their conversation.