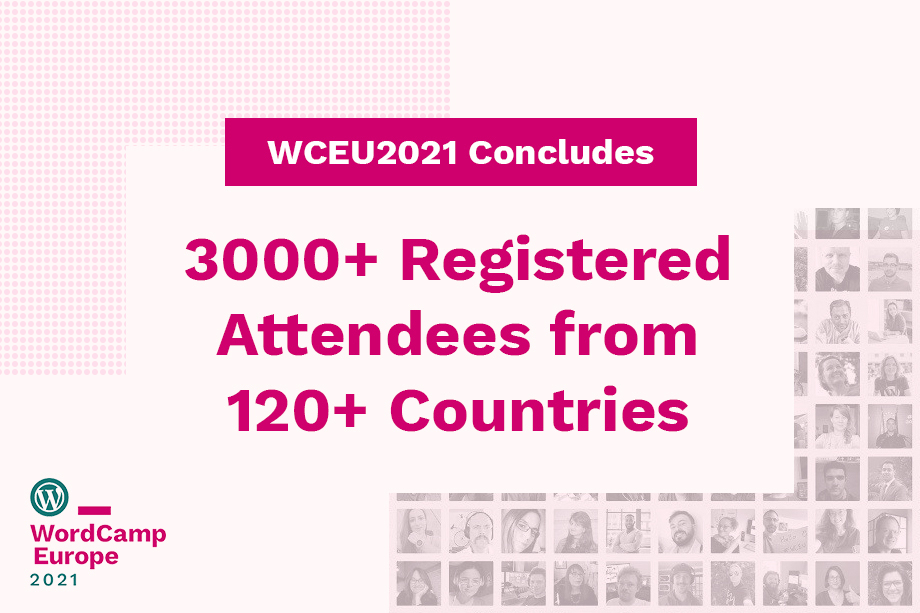 One of the biggest online WordCamp this year, WordCamp Europe 2021 Online finally concluded last week. We were the official media partner for the event and had an awesome time at WCEU as we attended all the sessions, including Track One and Track Two. The DevotePress team would like to say “Congratulations” and a big “Thank You” to the WCEU team for delivering such a grand extravaganza.

As a media partner, we live-tweeted all the sessions during this three-day-long event on our Twitter. Make sure you check them out. You can follow us on Twitter, Instagram, or Facebook to get updates. With that being said, here’s everything that went down at the biggest online WordCamp conference.

WordCamp Europe 2021 Online was hosted by the two Global Leads for the event, José Ramón Padrón and Lesley Molecke. Both of them were actively participating throughout the event, from opening remarks to interviewing sponsors to closing; everything was interesting and fun with José and Lesley. We couldn’t have got a better duo!

Numbers first! The second of its kind, WordCamp Europe 2021 Online witnessed more than 3200+ Registered Attendees with more than 1800+ users logging in at once. That’s a massive number and we’re very happy to be a part of such a huge phenomenon. An audience from 120+ countries around the globe attended the event, which was an amazing fact. There were a total of 29 exciting sessions from 48 inspiring Speakers/Presenters/Panelists and 15 Sponsor Interviews at the event. The stats prove that the love, passion, and enthusiasm for WordPress and the WordPress community around the globe are identical and absolutely immense. With this number, WordCamp Europe 2021 sure was one of the most impactful virtual events of all time.

This year, the WCEU team had arranged an impressive organized system for all the registered attendees. Registered Attendees were provided access to all the sessions, and networking lounges as well. There were separate Rooms for different meetings, Lounge areas, and networking areas, where attendees could have access to better networking with fellow audience and speakers/sponsors. Moreover, you could also directly message your fellow attendees, which is a great option for those who’re not comfortable networking publicly. So, all in all, the whole system was organized professionally and everyone had access to better communication and networking.

During the event, the generous event sponsors gave away virtual goodies for registered attendees, which included exciting offers and discounts with coupon codes.

WordCamp Europe 2021 Online gave us an amazing group of speakers, presenters, and panelists from around the globe. All of the sessions during the event were amazingly interesting and attendees were very actively involved through the live chat option. Talk sessions including 10-minute Lightning talks, 30-minute long talks, and quick sponsor interviews were held on Track 1. International Speakers from around the world took part and presented their talk in front of the audience and we must say, the presentations were as impactful as they would’ve been in person. So, a big Thank You to all the speakers for coming forward and sharing their knowledge and views. During the quick sponsor interviews, we got to know different personalities from many big companies as well. It was a very interesting session to take place.

Unlike the previous years, this year, we didn’t have a separate Contributor Day. Instead, we had Contribution Sessions going simultaneously on Track 2 while the regular sessions with lightning talks and sponsor interviews took place on Track 1.  During all three days of WCEU2021, Track 2 was filled with many innovative contribution sessions, where all interested attendees could participate and learn about contributions. So, it is safe to say that the new concept of taking Contribution simultaneously with conference days was a great idea. 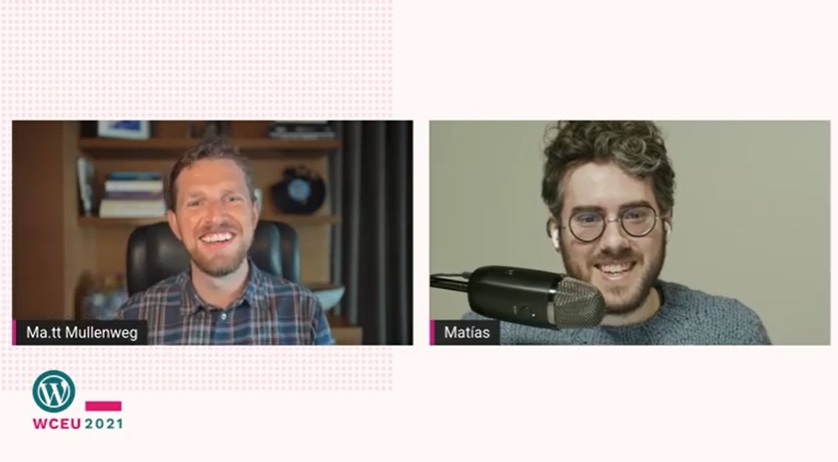 Similar to the previous year, Matt Mullenweg and Matias Ventura came together and conducted an interesting session to introduce everyone to the new updates coming in WordPress. The conversation was one of the main highlights of WordCamp Europe 2021 Online. Both of them had an impressive talk on the upcoming WordPress 5.8 release and Gutenberg Updates. They talked about how the block editor is coming into shape and getting ready to become a site builder. A lot of amazing tools and enhancements are coming our way. For instance, Duotone Image Filters, Enhanced Navigation Block, Enhanced Block Patterns, Nested Blocks, Drag-and-drop Enhancements, New Design Tools, Quick Text Overlays, Block Transformation, and many more. Overall, the talk was very interesting, informative, and enthusiastic. We are sure this talk proved we are in hands of great leaders and how the platform reached where it stands today.

You can watch the video below to know about the upcoming updates in detail.

Matt and Matias’ Conversation at WCEU2021:

After the conversation with Matias Ventura, Matt had an hour-long Q&A session with Brian Krogsgard. You can watch the whole Q&A session below.

Missed WordCamp Europe 2021? Don’t Worry! You can still watch your favorite sessions. Below are the links you need. Happy WordPressing!