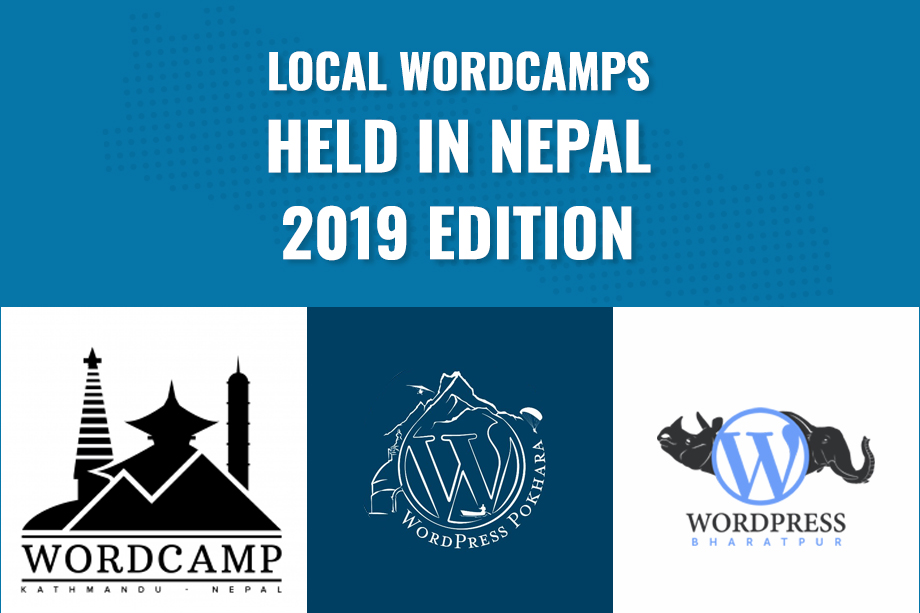 Before this year, 2019, comes to an end, let us present to you the summary of all local WordCamps held in Nepal in 2019.

Who does not love WordCamps, right? Every WordPresser who has a genuine love for this platform loves attending WordCamps and networking in the community. In the context of Nepal, since its inception, our community has only grown with better stability and tenacity. From the community of only a few members, today, WordPress Nepal has various local communities all around the country. It is a proud and cheerful thing for all Nepali WordPressers! Similar to last year, communities from different cities hosted their own city-based WordCamp welcoming everyone from in and across the nation. We also witnessed new cities coming forward with their own local WordCamps. We feel euphoric to be growing and learning every day. Today, we are going to list out the local WordCamps held in Nepal this year.

WordCamps are amazing. We can take it as WordPress conferences that include many presentations from speakers all around the globe, community networking, uncountable career opportunities, and more. It is basically everything that a newbie WordPresser need in order to dive into the community and know more about this wonderful platform. Nowadays, WordCamps are not even a country’s affair, even local communities from a certain country can organize a local WordCamp. WordCamp Central encourages smaller WordPress communities to organize WordCamps in their own cities and further extend the reach of WordPress.

This year, we witnessed three different local WordCamps held in Nepal – WordCamp Kathmandu 2019, WordCamp Pokhara 2019, and WordCamp Bharatpur 2019. These WordCamps were organized in their respective cities and were a huge success. WordCamp Bharatpur 2019 was the first of its kind and we want to congratulate the community for taking the initiative. We hope to see the same passion and love for this phenomenal WordPress platform in the coming days as well.

With that being said, let us guide you through all the local WordCamps held in Nepal and what they were all about.

WCKTM2019 took place in the month of March this year at Bougainvilla Events in Tripureshwor, Kathmandu. The event was a huge success. It was a two-day event, the first was the official WordCamp conference day and the second was the Contributor day. The two days featured inspiring talks, interesting presentations, fun activities and a huge crowd of WordPress enthusiasts. Not only the event conference, but the after-party was awesome too. It gave us an opportunity to refresh and network with fellow WordPressers after a long day at the conference.

The registration began at 9 in the morning and the attendees flooded into the swag store to grab their WCKTM swags after the registration. We saw a total of 15 presentations; 9 in Hall Filter and 6 in Hall Action. Meanwhile, there was also a workshop happening in a separate lab. The workshop was for beginners and those who wanted to learn Gutenberg. There were engaging photo sessions and delicious food. The after-party was refreshing as well. So, all in all, the first day of WordCamp Kathmandu was a hit.

The second day of WCKTM2019, the Contributor day was also a great success with more than a hundred attendees. The registration started at 10 in the morning, followed by the introductory session. The introductory session was hosted by none other than the man himself – Mr. Utsav Singh Rathour.  There were a total of three teams divided for the Contributor day: Theme Review, Support, and Polyglots. All of these teams were led by specific WordPressers; Theme Review team by Sandilya Kafle and Biplav Subedi, Support team by Abhishek Rijal and Regan Khadgi, and Polyglots team by Yoav Farhi and Sudeep Balchhaudi.

To know more about WCKTM2019 in detail, visit here.

WordCamp Bharatpur 2019 happened for the first time ever in the city famous for wildlife, Bharatpur. The event took place on November 9, 2019, at Panaroma Garden in Bharatpur. It was a one-day event and had two halls for the presentations – Hall Elephant and Hall Rhino.

Following the registration and opening ceremony, the official event started featuring many interesting presentations. There were a total of fourteen different speaking sessions including a panel discussion. All of the talks were excellent and inspiring. The distribution of “Token of Appreciation” session followed the closing ceremony. Besides all these, WordCamp Bharatpur 2019 also featured a group photo session as well.

All in all, WordCamp Bharatpur 2019 was a successful event and the organizers did an incredible job making the event grand and extraordinary.

The second of its kind, WordCamp Pokhara 2019 took place on 7-8 December, 2019 at Hotel Pokhara Grande. It was a successful local WordCamp with nearly 200 attendees. Unlike last year, this time, WCPKR took place for two days, first as the official WordCamp day and second as the contributor day. However, the venue was different for both of the days. The official conference happened in Hotel Pokhara Grande and the Contributor day took place at Informatics College in Ranipauwa, Pokhara.

Apart from the registrations and swag stores, the first day featured so many inspiring talks from speakers around the globe including Nepal, India, Bangladesh, Japan, and America.

The Contributor day featured informative workshops regarding WordPress Translation, Theme Review, Support, and more. Contributing to this wonderful platform is so important and such a phenomenal thing to do. Attendees were enjoying this beautiful day and participating passionately in the community.

We hope to see the same enthusiasm and support for WordPress by our local WordPress communities in the coming years as well.