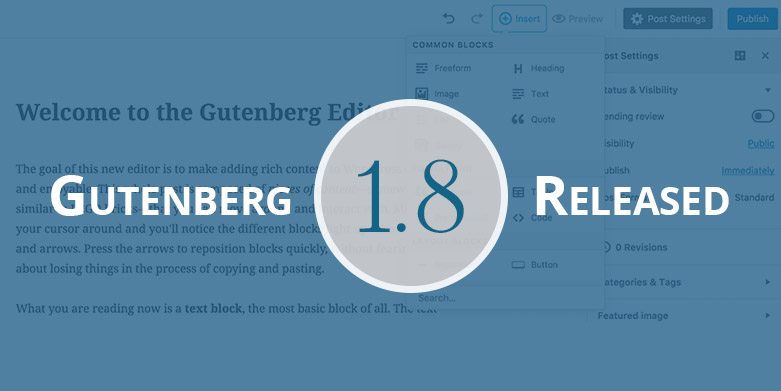 The newest version of Gutenberg Editor is here – Gutenberg 1.8. The new version was released over the weekend with several improvements and added functionalities.

The changelog had a full list of more than 50 improvements in Gutenberg 1.8 this time. This release introduced several under the hood improvements supporting more plugin opportunities as well as allowing developers to specify templates, a list of predefined blocks. Gutenberg 1.8 has also included design iterations, mobile improvements, initial work on a more rewarding publishing flow, and more.

Now, let’s have a quick look at these improvements in Gutenberg 1.8.

Gutenberg 1.8 has introduced block-templates as a list of blocks specification, which developers can use when registering a new custom post type. The block templates define a set of pre-configured blocks that will initialize when a user creates a new post. Gutenberg lead engineer Matias Ventura has demonstrated what a block template for a book custom post type might look like:

The new version has also improved the design of the tools menu toggled by the ellipses at the top of the editor to have a more lightweight UI that will lend itself better to displaying items added by extensions in the future. The new design displays multiple menu items as a radio group where the selected item shows a checkmark, an approach that Gutenberg designers found to be more intuitive.

The ability to filter allowed block types for developers has also been added to version 1.8 by specifying an array of type names that can be shown in the inserter component. The capability paves the way for block nesting where developers can define allowed children types. It also allows custom post types to specify which blocks are allowed or restricted.

Apart from these improvements, Gutenberg 1.8 also introduced many other enhancements and some of them are listed below:

Check out the full list of changelog to know more about the enhancements. Subscribe here to keep up with the Gutenberg Editor updates. And if you have anything to add, share or ask, feel free to use the comments section below.