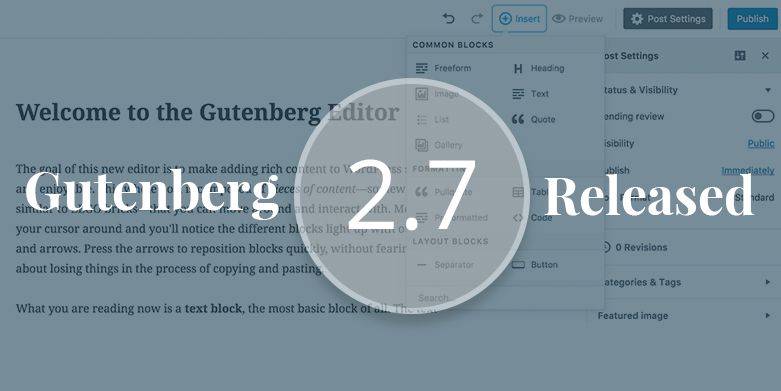 The Gutenberg Editor is here with its updated version, Gutenberg 2.7. The new version was released on 18th April and as usual, it has brought several updates, tweaks, and enhancements along with it.

Gutenberg 2.7 had a full list of more than 90 enhancements and bug fixes this time. The release has introduced a number of visual refinements around block controls, a new block for pagination, and pushed much of the Plugin API out of its experimental stage. It also adds the highly requested ability to edit permalinks as well.

The new version has introduced a new pagination block that adds a page break. It allows users to break posts into multiple pages. The block is located in the Block-Layout Elements section.

The plugin has also brought several updates to link insertion interface, including the restoration of ‘Open in new window’ option, removal of the Unlink button (instead, links can be removed by toggling off the Link button in the formatting toolbar.), improved visibility of insertion UI when selecting a link and many more.

The Plugin Sidebar API has been now exposed and considered as final. The changes refactor all the existing Sidebar components to share the same set components and remove duplicated custom CSS styles applied to <PluginSidebar />. Know more about this change here.

Here are a few more notable changes that came along with a long list of enhancements in Gutenberg 2.7 this time:

The Gutenberg Editor is getting better with each updated version. The developers are slowly implementing new features to make it as easier as possible for users. If you haven’t tested it yet, we suggest you give it a try. If you find something that bugs you, you’re always welcome to patch things you don’t like in WordPress.