WordPress 4.8 will drop around June 8, 2017. And, WordPressers all over the world can barely contain their excitement. So, what’s in store?

As usual, the core development team, led by Matt Mullenweg, has been hard at work. WordPress 4.8 is going to be the first major release of 2017. It generally aims to refine existing features and lay foundations for Gutenberg, the next-generation editor. Nevertheless, there is a slew of new features that WordPress users are going to rejoice having. Let’s just give you a basic rundown of the new features coming in WordPress 4.8. 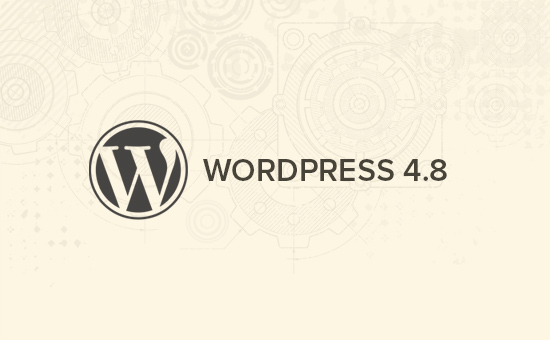 Visual Editor in the Text Widget

Innately, WordPress comes with a plain text widget. The widget contains a simple text box where you can add text and HTML code. However, beginners who are not familiar with HTML were unable to add links or use basic formatting in the text widget.

WordPress 4.8 will come with a new text widget that has a simple visual and text editor. Beginners can easily add links, create lists, or make text bold/italic without writing any HTML code.

WordPress 4.8 will introduce an improved image widget which will enable users to add images easily into the sidebar. Currently, you have to write HTML or use a plugin to display an image in the WordPress sidebar.

With the new image widget, you will be able to upload an image right from the widget or select any image from the WordPress media library.

Like the image widget, WordPress 4.8 will also introduce a new video widget. It will allow users to easily upload videos to their sidebar and display any video from YouTube, Vimeo, or any other oEmbed provider.

In case of multiple users on your website, then the widget will show them events based on their location. It will automatically try to detect a user’s location by sending their time zone, locale, and IP address to api.wordpress.org.

Users can themselves manually enter their location or view events from any other location.

These enhancements will improve significant parts of the WordPress core but are mainly for developers.

This article is a reiteration of an article from WP Beginner. If you want to learn about the features in detail with screenshots, then head over to the site using this link.