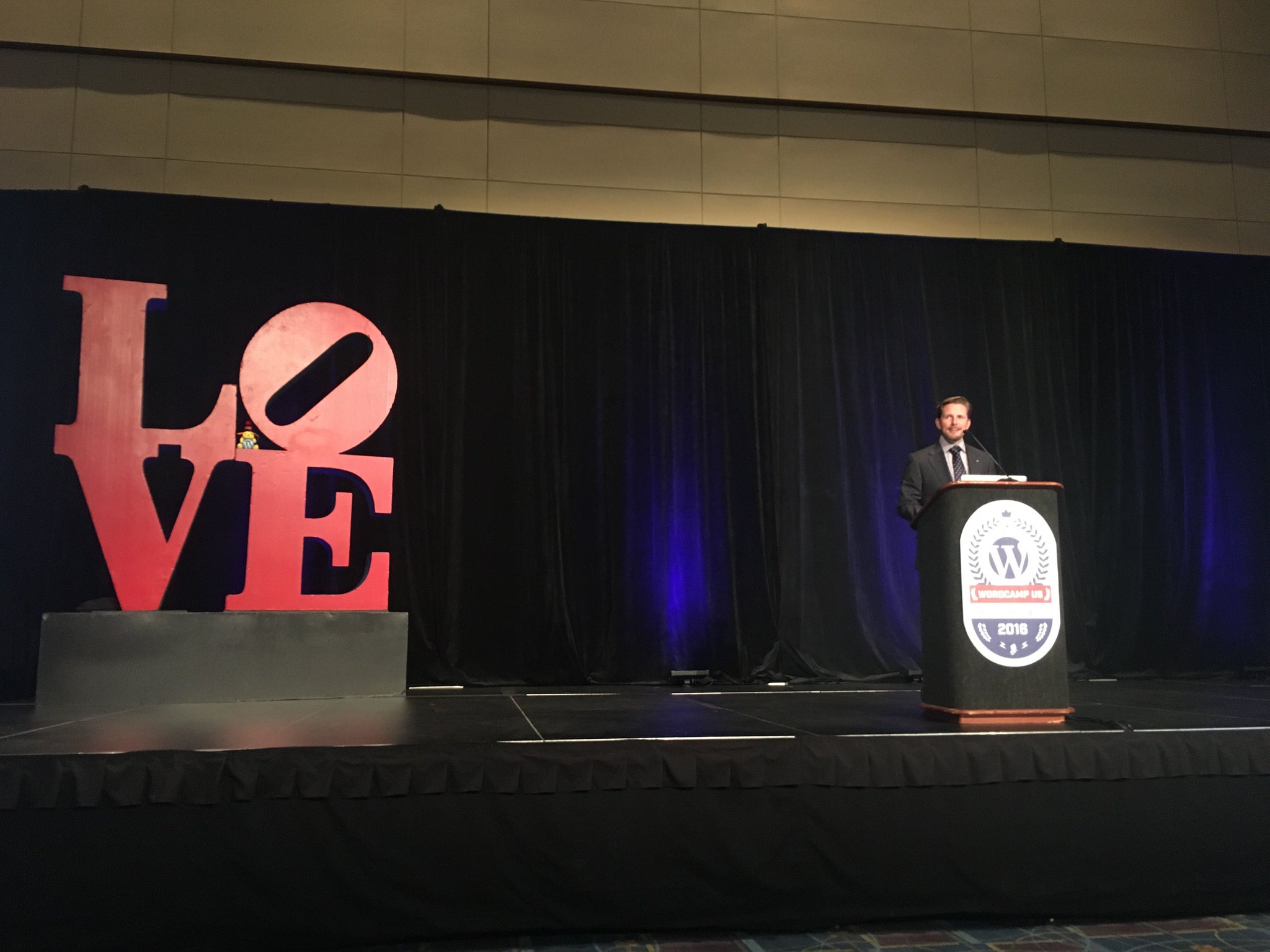 With 1923 attendees and 2028 live stream viewers, WordCamp US completed successfully in Philadelphia this very weekend. Delivering his 11th annual State of the Word address to the captivated attendees, Matt Mullenweg created an ambiance for everyone to celebrate the progress of WordPress so far while announcing his visions for 2017.

As he began, he thanked the sponsors for their support without which they couldn’t have made WordCamp US so affordable. With the actual cost per person amounting to $516, Mullenweg said sponsors cover roughly 85-95% of the cost of WordCamps worldwide. In 2016, WordCamps around the world sold over 36,000 tickets, while over 1000 sponsors subsidized the costs.

This year, 62,566 people worldwide attended meetups in their local communities. Over one-third of the numbers were new members. Mullenweg said it was a testament to the entire WordPress Foundation as it was the fastest growth in the past 5-6 years.

The WordPress Foundation is restructuring the way it handles WordCamps. In 2016, the Foundation received approx. $4.3 million. The amount went up from $2.8 million in 2015. About 99.9% of those funds are related to WordCamps. Mullenweg announced that the 501(c) nonprofit will move WordCamps to its own company – WordPress Community Support, forming a PBC (Public Benefit Corporation) that is fully owned by the Foundation.

Since certain things that happen at WordCamps could endanger the whole of WordPress Foundation, Mullenweg explains it was important to move WordCamps to the subsidiary structure. Since the WordPress Foundation will have more flexibility there are plans for supporting like-minded non-profits that are aligned with the overall education mission of the organization like Hack the Hood, Internet Archive, and Black Girls Code. The Foundations also plans to run educational workshops in underdeveloped countries and promote hackathons to help build websites for non-profits and NGOs in 2017.

The Foundation will focus on supporting like-minded non-profits, education/workshops, and hackathons that benefit non-profits/NGOs. #wcus pic.twitter.com/6VfdP82KuM

Calypso as the Future of the WordPress Interface

WordPress.com users have widely adopted the new interface for publishing. The statistics Mullenweg shared showed that 68% of posts went through Calypso since its launch, 17% via mobile, and 15% through the traditional wp-admin. There is also an increase in the use of Mobile apps and browsers.

We now need to start thinking about mobile devices as the primary way people are going to interact with WordPress in the future,” Mullenweg said.

Matt Mullenweg submitted his first Calypso Pull Request on December the 3rd and said he found it pretty easy.  He said that learning JavaScript is the key to moving from a document based system to a true application. He explains that with REST API coming into WordPress, JavaScript is the future that wp-admin is going to be as things are faster and everything is done instantly.

Calypso is now Plugin aware. And the next step is to bring in support for Automattic’s plugins – WooCommerce, Akismet, Jetpack, and VaultPress. Mullenweg said the big focus for 2017 is to make plugins Calypso-aware, starting with a handful of the most popular ones before opening it up to all plugins. “The hope is that Calypso, or something like it, is actually what becomes the interface that drives WordPress,” said Mullenweg.

Design.blog is another fun project starting this year. Over 40 people have already contributed to the blog writing about design, inclusion, and with/without tech. This is one of the areas that has more of a human side rather than the technical side. He recommends we read two very impressive articles. One is by Kat Holmes titled “Who Gets To Play?” and the other by Hajj Flemings titled “Hajj Flemings on The 100 Project–The Plan to Rebrand Detroit“.

Announcing statistics, Mullenweg said that 11.45% of the active websites are now using HTTPS. WordPress core has updated its recommendations and requirements with the help of hosts adopting the latest technologies. The official recommendation for WordPress hosting is now PHP 7 or higher. Mullenweg said the network’s performance doubled and CPU load fell in half right after WordPress.com switched to 100% PHP 7. Only 4% of self-hosted sites are on PHP 7, but the new recommendation should help move more hosts towards getting their customers updated.

https://t.co/VrQffeOtG0 has been 100% switched over to PHP7, bringing significant performance improvements. #wcus pic.twitter.com/MChiS9QBJh

We want to bring more of the web to be secure, which is especially important in the post-Snowden era,” he said.

Matt Mullenweg invited Helen Hou-Sandi on the State of the Word stage to introduce to us, WordPress 4.7 – Vaughan.

Undoubtedly, WordPress 4.7 is one of the most exciting and successful updates for WordPress in some time. Mullenweg has in mind a new strategy for core development in 2017.

“We’re at a junction for WordPress where what got us here won’t get us there,” Mullenweg said, after having called attention to the growth of WordPress’ market share from 13.1% to 27.2% in the past five years.

Mullenweg proposed a new structure for WordPress releases. He wants to have design leading the way for the upcoming releases. The upcoming year will have no set release schedule. Mullenweg is changing the WordPress’ predictable release cycle wanting to tackle the larger items on the to-do list. “I’m putting back on the ‘product lead’ hat for 2017,” he said. Users can look forward to not having three releases the next year. He said the core needs to focus on performance and fixes to existing functionality in three main focus areas: WP REST API, the Editor, and the Customizer. So, now the releases will be focus led instead of time led.

A look at the past: 14 WordPress releases in the past 5 years, led by 10 release leads, a very steady 3 per year. #wcus pic.twitter.com/excnmkNbRS

When asked about the new approach to releases in the Q&A segment, he answered, “I think we’re trying to counter stagnation. Even though we’ve had lots of releases, certain parts of WordPress have stagnated and haven’t made the leaps that they could.” Being part of a feature plugin team can provide developers with a way to be involved in more active releases and build momentum for eventual inclusion of their projects in core, is what Mullenweg suggests.

Mullenweg has plans to identifying a tech lead and a design lead and work with them as the overall product lead. “We’re at the point now where the steps WordPress needs to take are more significant to get the other 73% of the web it doesn’t have yet,” Mullenweg said. He has a vision that when one area of WordPress reaches the point where the software can ship significant user-facing improvements, a release will be born.

As a tribute to WordPress’ poetic roots, he concluded by reading a poem called Praise Song for the Day by Elizabeth Alexander.

The State of the Word address will soon be available on WordPress’ brand new YouTube channel, something Matt Mullenweg announced in the beginning of his speech. You can still watch it on the WCUS Live Stream.