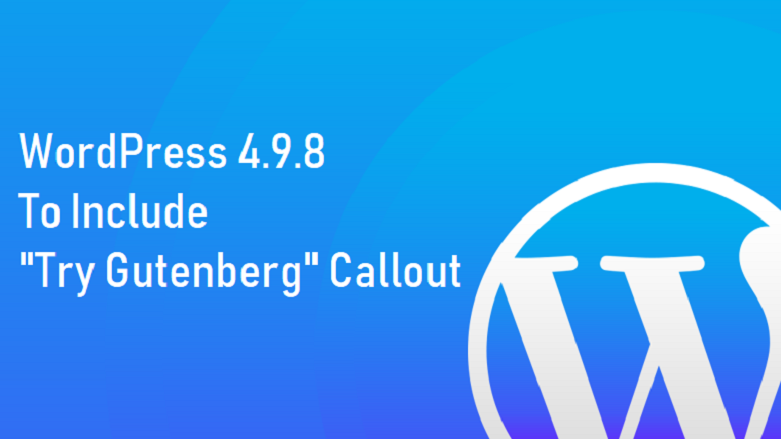 WordPress 4.9.8 is going to introduce a new “Try Gutenberg” Callout with its release.

WordPress 4.9.8 was originally announced as 4.9.7, however, the WordPress core contributors have decided the general focus and set the release schedule of 4.9.8 on July 31, 2018. In the meantime, the 4.9.7 security and maintenance release was rolled out including 17 bug fixes.

The newly to-be-introduced “Try Gutenberg” callout can be some kind of pointer or notice on your WordPress dashboard with a link to install the plugin along with links for where to learn more and how to report issues, according to the WordPress Core Committer, Mel Choyce. This callout solely focuses on getting more eyes on Gutenberg before being officially released. Choyce added the most recent round of designs to the ticket four weeks ago and contributors are still iterating on the design and text for the callout. Another iteration is expected to be added to the ticket early next week.

As mentioned earlier, the main motive behind the Gutenberg callout in WordPress 4.9.8 is to make more users aware of Gutenberg and to gather more testing and feedback before the new editor lands in the core. Therefore, WordPress 4.9.8 is another step in Matt Mullenweg’s roadmap for getting Gutenberg into 5.0.