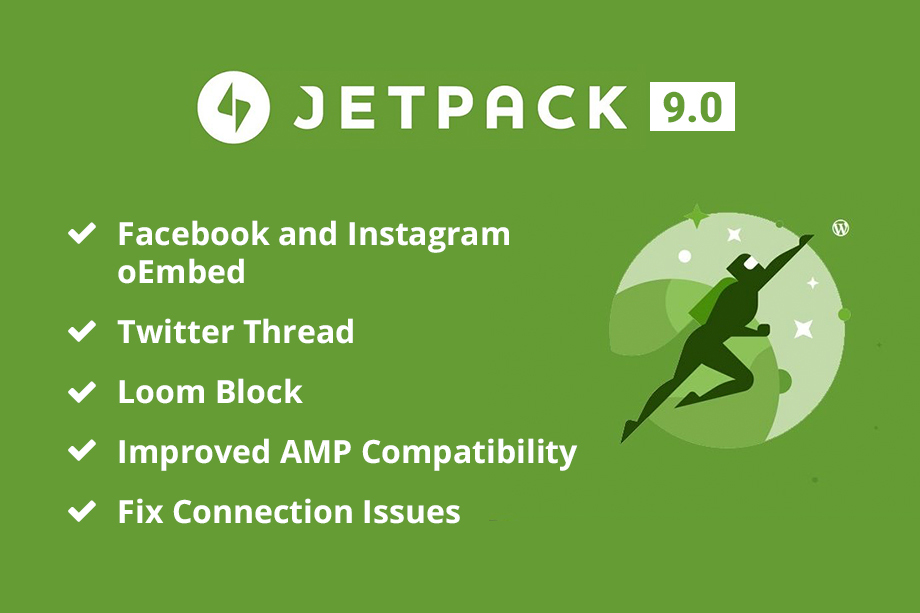 A major release, Jetpack 9.0 was released yesterday and it has introduced some cool features including a new block. However, the team has now released a newer version, 9.0.1, as 9.0 had some minor issues. The major 9.0 update includes new features and functionalities like Facebook and Instagram oEmbed, Twitter Thread, new Loom Block, improved AMP compatibility, and connection issue fixes.

The newly introduced features and functionalities in Jetpack 9.0 make it easier to transform your content and extend your reach globally. Moreover, it is now easier to move content from your site to different social media streams.

Now, let’s have a quick look at the major changes in Jetpack 9.0.

You might be aware that Facebook and Instagram are going to end support for oEmbed on October 24. This will cause you to register as a Facebook developer, create an app, and add relevant API keys to all requests. Not being able to do this will display you an error message while trying to embed posts from Facebook or Instagram. Witnessing all the hassle, Jetpack 9.0 has come up with a simpler solution. You just have to simply connect your site to Jetpack and you will be able to embed Facebook and Instagram posts like before.

With the new 9.0 update, you will get new options in the Publicize feature. It will allow you to publish to Twitter as a link in a single tweet or as a tweet thread. Your Twitter will automatically be updated as you publish new posts with any text, images, or videos.

Furthermore, you can also see the paragraph splits while customizing. This will help you see the exact Tweet thread that will be displayed.

A new Loom block has been introduced in Jetpack 9.0. Loom is a video recording tool that helps you get your message across clearly and quickly by recording you and your desktop simultaneously. So, the new Loom block will allow you to embed Loom videos on your posts/pages by simply pasting the URL.

Jetpack 9.0 has enhanced compatibility with the AMP plugin to speed up your site.

Check out the full changelog to know more about the updates in Jetpack 9.0.

You can get in touch with the members of Jetpack if you have anything to ask about the new update or want to give feedback.

We recommend you to update your Jetpack to the latest version right away to get the new features and avoid the fatal errors and changes.