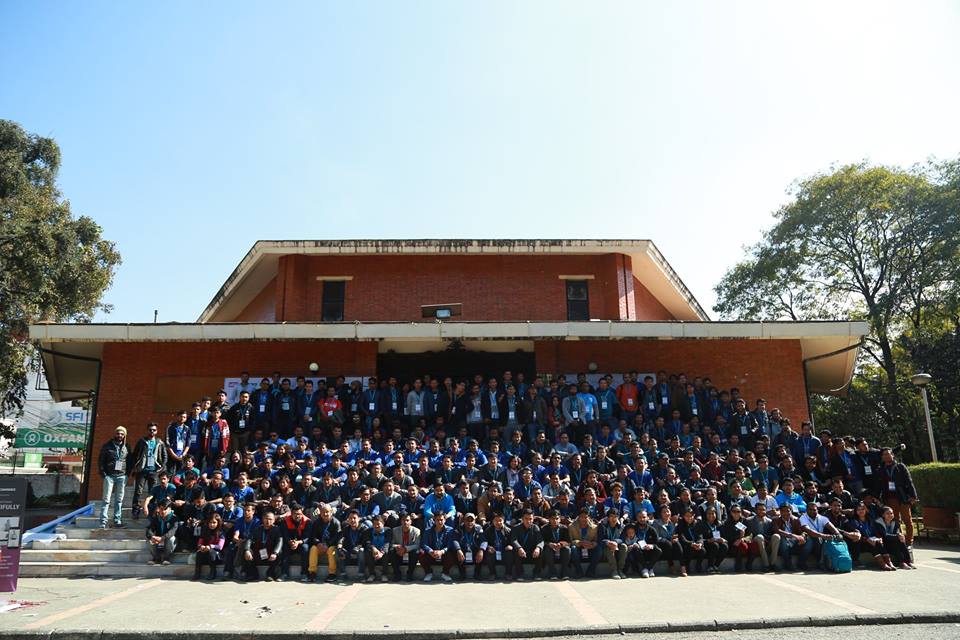 Last weekend, we saw the successful completion of the first ever city-based WordCamp in the country. DevotePress was proud to represent WordCamp Kathmandu 2016 as the official online media partner. The one-day conference was filled with talks, workshops, and fun activities outside the two halls where the conferences were scheduled. WordCamp Kathmandu 2016 is over and we bring to you everything that happened on November the 19th, 2016.

The day officially started with a huge inflow of attendees in Nepal Administrative Staff College, Jawalakhel. However, for the organizers and volunteers, the day began way many hours before that. The registration desk, sponsors’ desks, swag store and happiness bar were all set outside Hall 1. The sponsors’ desks were packed with Swags of all kinds from badges and stickers to t-shirts and mugs.

The inflow of attendees started an hour prior to the Opening Remarks. The registration desk was completely packed with attendees coming to register and the volunteers were busy giving away IDs and T-shirts. The opening remarks were delivered by Sakin Shrestha, the Lead Organiser of WordCamp Kathmandu 2016. He walked the attendees through the history of WordPress Nepal community, introduced Wapuu – KTM, the official mascot for WordCamp Kathmandu 2016 and handed over the reins of WordPress Nepal community to Yam Bahadur Chhetri who’ll be the next lead of the community.

The conference had 10 different speaker sessions scheduled along with two workshops and a panel discussion. Two halls in the venue were booked for the conference purposes. Hall 1 accommodated the sessions for seven speakers throughout the day, namely, Utsav Singh Rathour, Umesh Chaudhary, Sunita Rai, Sushil Adhikari, Digamber Pradhan, Mahangu Weerasinghe and Amit Singh. On the other hand, Hall 2 accommodated three speaker sessions by Sudeep Balchhaudi, Suwash Kunwar and Regan Khadgi.

Following the lunch break, Hall 2 hosted a Workshop on Rest API by Kishor Mahato, Ashok Maharjan and Abiral Neupane and a Workshop on SASS by Mishal Rai, Ritesh Shakya and Kanchha Kaji Prajapati. The panel discussion titled “Kickstarting Your Career in WordPress” was held in Hall 1 and had three participants: Vishal Basnet, Sweta Shrestha and Surendra Shrestha with moderator Raushan Jaiswal.

Furthermore, we had a chance to take interviews with few of the speakers which you can find here. WordCamp Kathmandu 2016 was extremely punctual with volunteers working as timekeepers to keep speakers and all the programs timely. The speaker sessions were all informative and engaging. However, it was the workshops that were completely packed with WordPressers wanting to learn something new.

The sponsor desks that were full of swags in the morning seemed to have been almost completely emptied by lunch time. The Catch Internet stall had a new concept – Face Painting. And by the end of the day, we could see almost half the attendees had logos of WordPress, WCKTM and Wapuus painted on their happy faces. The sponsor desks also held Lucky Draw contests and handed out gift hampers to the lucky attendees.

The panel discussion touched on a very important topic. It was aimed at making people aware of the career prospects in WordPress. Sweta Shrestha shared her insights on how WordPress had been helping increase the participation of women in IT.

Moreover, there were three new things in WordCamp Kathmandu 2016. The Happiness Bar, where you could get insights to your problems in WordPress from experts, the Photo Session, where all the attendees gathered just before lunch to have a group photograph and a Photography competition, where the attendees could upload photographs of any activity at the WordCamp with a hashtag #wcktm2016 in their social media accounts and be eligible for exciting gift hampers.

Token of Appreciation to WEN Themes

Token of Appreciation to DevotePress

The official conference ended with Closing Remarks by Sakin Shrestha. All of the sponsors and supporters received a Token of Appreciation followed by Sakin calling all the organizers and volunteers on stage to thank them for their support and hard work.

What’s more, there was a grand after-party held at Moksh Bar, Jhamsikhel. The attendees found it as a time to relax, chat and network further with fellow WordPressers. A dance floor was also opened and people sure had fun dancing to the tunes they loved.

In conclusion, WordCamp Kathmandu 2016, with over 260 attendees was a huge success. The hashtag #wcktm2016 got trending on Twitter on the day of the WordCamp. Everyone who attended left with minds full of ideas hearts full of memories and arms full of swags.

1 thought on “Everything That Happened at WordCamp Kathmandu 2016”