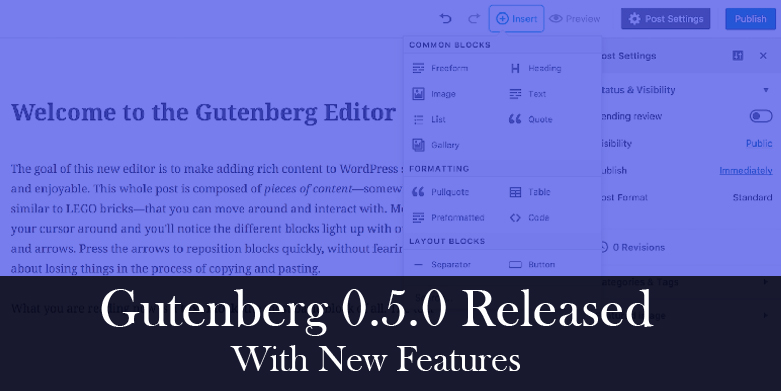 Gutenberg 0.5.0, another weekly update of the Gutenberg Editor was released yesterday. The last version of Gutenberg plugin, Gutenberg 0.4.0 didn’t have too many notable changes on the front-end but introduced an API for handling pasted content. Developers of Gutenberg are aiming to have specific handling for converting pasted content from applications like Word, Markdown, and Google Docs to native WordPress blocks. Gutenberg 0.4.0 also added navigation between blocks using arrow keys and included a new approach for rendering embed frames.

Gutenberg 0.5.0 hit the dashboards yesterday with more than 30 improvements. Some of the major enhancements this time are the improvements to the writing flow, the new verse block for poetry, the ability to drag-and-drop on image block placeholders, and a new display for recent blocks.

With that being said, let’s look at the major improvements in detail.

Gutenberg 0.5.0 brought some improvement to the writing flow. The editor will now avoid showing block UI while the user is tying and/or starting a new paragraph in a text block. You can test this by typing and pressing enter twice to begin a new text block. Small improvements like this one are gradually bringing a bit more ease to the editor which is still full of surprising experiences.

The newly added feature in the image place holders gives you the power to upload the images via drag-and-drop. While your image is uploading, it fades in and out. The process can be a little alarming, especially if the upload never resolves. Here is an example of how it’s going to show up:

Gutenberg 0.5.0 also introduced a new Verse block, intended for poetry. It has a slight indent, as compared to a plain text block, but it doesn’t yet work well with copy and paste. Those who cannot compose poetry in WordPress are likely that you will be pasting in poetry content from somewhere else on the internet. Other than the initial bugs, it is a useful block for those who often post verse. 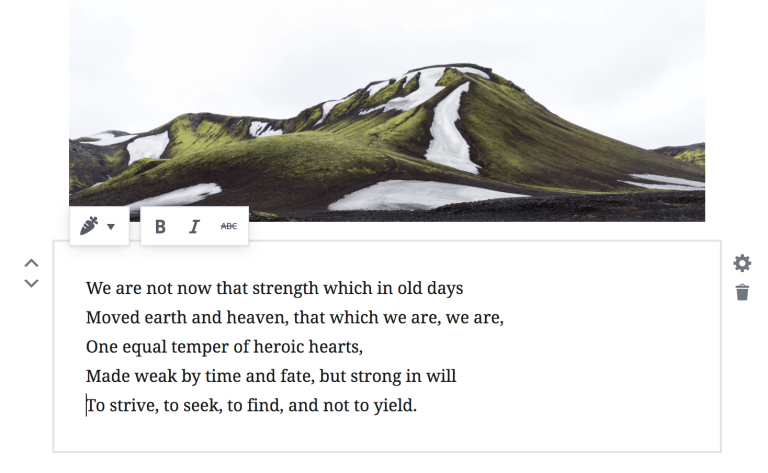 Version 0.5.0 implemented a new display for recent blocks. A maximum of eight are shown and the most recent ones are displayed at the top. It does not yet continue between editor sessions, but Gutenberg contributors are planning to add that in the future updates. 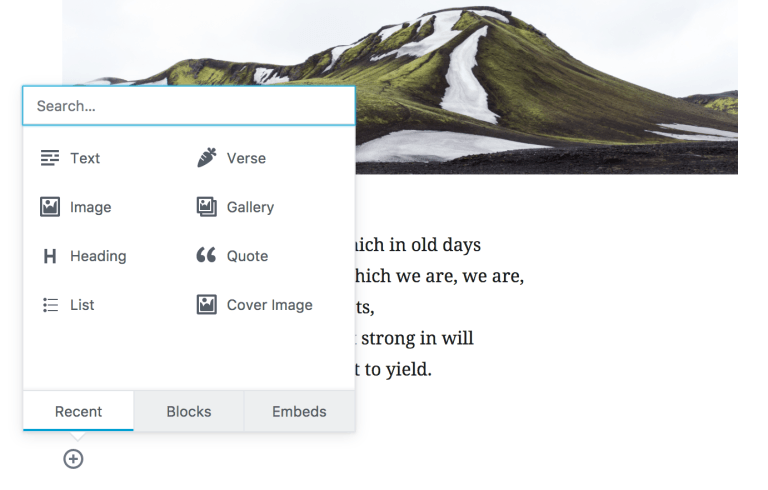 Here are a few other notable improvements in Gutenberg 0.5.0:

The Gutenberg Editor plugin is still on its way to make 100, 000 active installations. Subscribe here to keep up with the weekly updates of the editor. If you have anything to ask, add, or share, feel free to use the comments section.