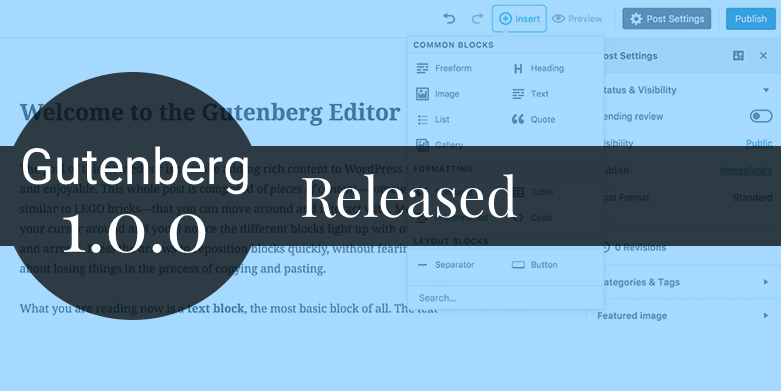 The Gutenberg Editor is here with its new version, Gutenberg 1.0.0. The newest version was released over the weekend. New releases are shipping out on a weekly basis. Design lead Tammie Lister said the team decided “not let numbers set expectations” and will carry on at the same pace with weekly releases.

This time, the changelog had a full list of more than 35 improvements included in Gutenberg 1.0.0. However, one of the most visible UI updates this time was the new drag and drop option for adding image blocks.

The new feature lets you add image blocks by dragging and dropping them into the editor. They can be placed directly within the content (between blocks) and also onto the image block placeholder. Gutenberg has also included a blue line indicator for dropzones where users can place an image.

Testers of Gutenberg said that the feature works smoothly but is a bit slow. The slight delay of uploading the image after placing it may leave the user confused about what is happening. However, the feedback on this particular pull request indicates that the team is working on displaying an immediate reaction to the image having been dropped, instead of waiting for the upload to finish.

Gutenberg 1.0.0 also merges the paragraph and cover text blocks. Contributors agreed that the two blocks could be easily combined and the colors and font size options from the previous cover block have also been added to the block settings sidebar this time.

Version 1.0.0 has also made several other improvements as well. Some of them are listed below:

The writing experience within Gutenberg is really improving, and the 1.0.0 release announcement also includes an animated gif to demonstrate a user typing in the paragraph block:

The editor is getting better at staying out of the way when the user is writing but even the slightest mouse movement within the paragraph block slides all of the block’s surrounding controls into view. This experience can be a bit annoying, however, it may be inevitable unless more of the UI can be buried under the inspector. The paragraph blocks currently display the most commonly used controls for writing text content, but users say that plugins hooking into this to create different types of writing experiences, either added more controls or cut it back to something more minimalist.

You can subscribe here to keep up with the weekly updates of the editor. And if you have anything to add, share, or ask, feel free to use the comments box.