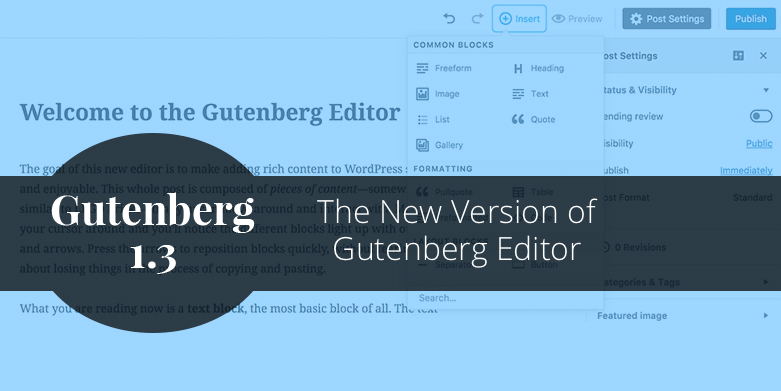 Gutenberg 1.3, another weekly update of Gutenberg Editor was released this week. This time, the changelog had more than 20 improvements which included some addition of features such as new Feedback option, the addition of opacity slider, option to convert a single block to an HTML block, and more.

Now, let’s have a closer look at the added features and improvements in Gutenberg 1.3.

One of the most visible updates in Gutenberg 1.3 for those who are testing the Cover Image block is the addition of an opacity range slider. It brings more flexibility to the feature than the previous on/off background dimming toggle provided. Users will be able to slide the opacity along a range snapped to percentages of 10.

The newest version introduced an option to convert a single block to an HTML block when Gutenberg detects conflicting content. This is a precursor to an open issue that proposes an HTML mode for blocks, essentially a mechanism for each block to be edited as HTML. Contributors are still discussing the best approach for implementing the UI, which we will likely see in a future release. 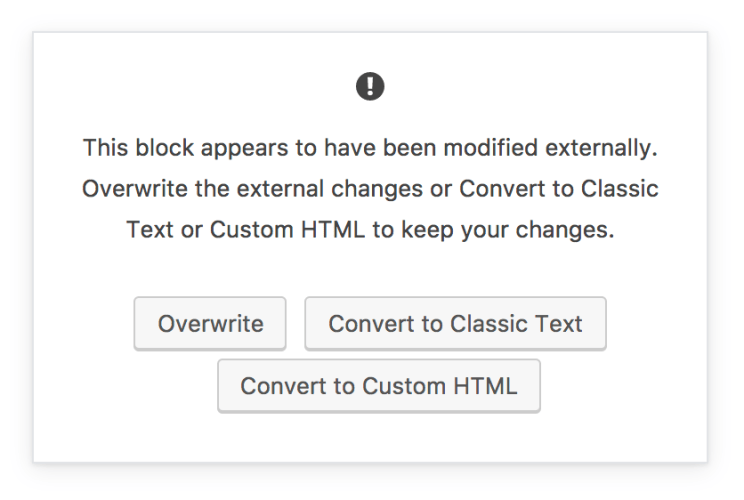 Gutenberg 1.3 has also added a new submenu item that ramps up the potential for gathering more feedback from people who are using the plugin. The Feedback link will appear in the plugin’s sidebar menu and lead to a polldaddy form that separates users’ comments into either a feedback or support channel.

The new link offers you an easily accessible avenue for sharing their thoughts and concerns. This option is especially helpful for those who are not as adept at using GitHub or writing meaningful bug reports. The forms guide the user to report important details of their setup, browser information, screenshots, and other useful information.

The Gutenberg editor does not track any information about users who submit feedback via Polldaddy forms and there is nothing to indicate that the responses will be made public. The Gutenberg team might not be able to respond to each submission individually, however, it would be helpful if they provided summaries of trends in user feedback and how it is informing the design and development of the project. This could go a long way to prevent users from perceiving that their concerns are being buried.

Mentioned below are some of the other small enhancements included in Gutenberg 1.3:

Subscribe here to keep up with the weekly updates of the Gutenberg editor. And if you have anything to add, share or ask, feel free to use the comments section below.