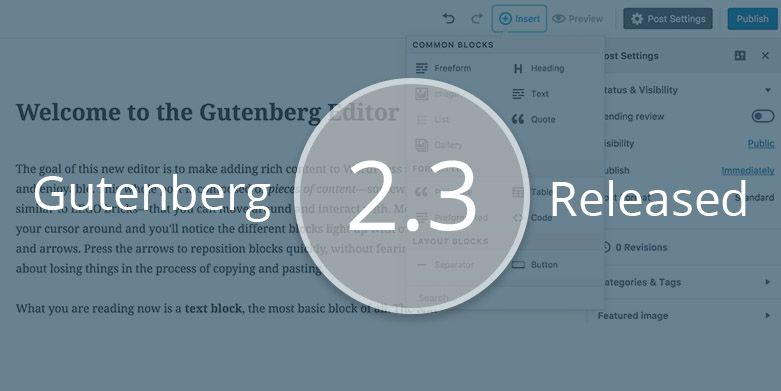 Gutenberg 2.3, another addition to weekly updates of Gutenberg Editor was released over the weekend. The new update has brought some interesting updates and some tiny tweaks in the editor as usual.

The changelog had a full list of more than 70 improvements in Gutenberg 2.3 this time. The new release included significant progress in consolidating the codebase and refining aspects of the experience. It has introduced APIs for extending Gutenberg beyond blocks, allowing plugins to register a full sidebar for their functionality. The new update has also included expansions to the template support (now allows to declare nested structures), ability to duplicate blocks, various design adjustments, and more.

Note: The public facing functions are marked as experimental as they are being iterated in the context of the major extensibility work going on outside of blocks.

It has also added CodeMirror (core library) to the HTML block for syntax highlighting.

Gutenberg 2.3 has simplified design presentation of editor header area for better consistency. In addition to this, the new version has changed the “Preview” button from being an icon button into a normal, gray button with no icon. This is in response to usability tests, which found that the eye on its own was not obvious as “Preview”.

Apart from these improvements, Gutenberg 2.3 also introduced many other enhancements and some of them are listed below: