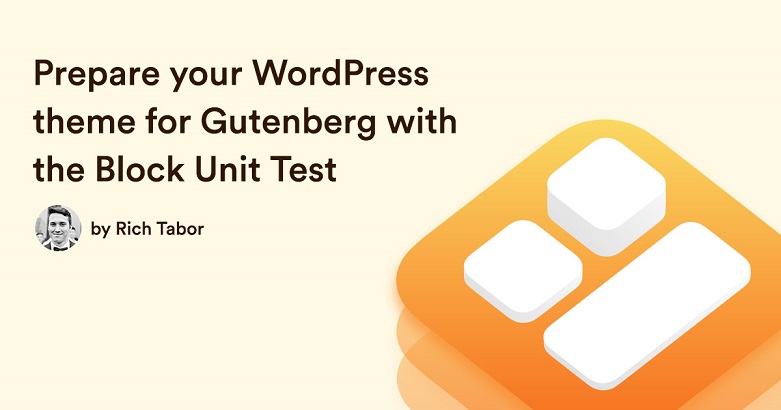 With the new plugin along with the Gutenberg Editor plugin activated, you can create a new page as a draft with an example of ever core Gutenblock. This helps to preview how the blocks would appear on the frontend of any theme. The plugin also includes variations on the core blocks with different alignment and column settings applied.

Block Unit Test has specially been designed and introduced in order to better understand Gutenberg and Tabor also is looking forward to creating products compatible with Gutenberg at ThemeBeans.

The theme developers can install the newly launched plugin as a first step towards making sure the front-end styles match the editor styles. It will make the transition process easier for the new Gutenberg users once WordPress 5.0 rolls out.

According to Tabor, “I added initial support for Gutenberg in my Tabor WordPress theme, as I use it on my own personal blog with Gutenberg. I needed a way to easily test each of the core Gutenberg blocks (and eventually third-party blocks) without having to manually add them every time I wanted to test something. As Gutenberg blocks get more dynamic and complicated, it’s a bit trickier to test for – as many blocks have different variations/styles/columns/grids/etc.”

Tabor is using the plugin while preparing the 20+ themes in his ThemeBeans catalog to support Gutenberg. He wrote the plugin to be extensible and made it open source on GitHub for other developers and theme shops to use. Tabor has also published a tutorial for adding WordPress Theme Styles to Gutenberg to help others get started.

Tabor said, “As a founder of a theme shop, it was apparent that I needed to hone in on Gutenberg and level-up my knowledge, technical skills, and consequently my products, in order to compete in a post-Gutenberg era of WordPress.” He believes that the foundation of the future of WordPress lies in the success of Gutenberg.

You can directly download the Block Unit Test for Gutenberg plugin or also check it out on the WordPress Plugin Directory.