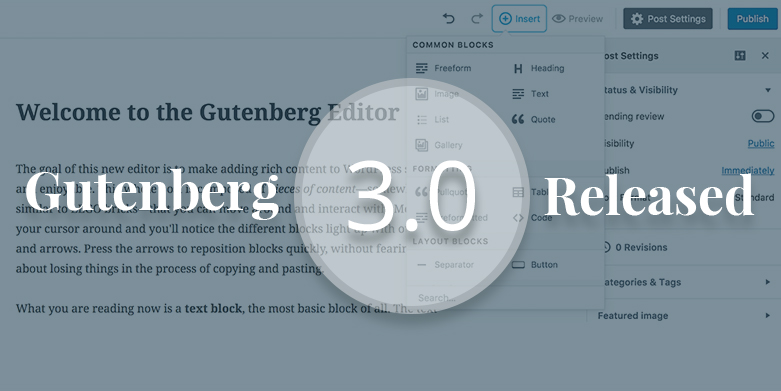 Gutenberg 3.0, the 30th update to the Gutenberg editor plugin has been released with new features and improvements. The new version was released yesterday on June 5, 2018, with more than 100 enhancements in it.

The developers of Gutenberg editor has been on their toes to make Gutenberg better with each update and has been constantly adding new features to make it more user-friendly. The previous version, Gutenberg 2.9 was released on 18th May with several improvements and fixes in it. Similarly, this time, Gutenberg 3.0 includes many major improvements and tweaks.

The 30th update to the editor, Gutenberg 3.0 has brought improvements to the block library, introduced child blocks, allow themes to opt-in to the visual styles, improved nested block selection and clarity, and many more enhancements. According to Matias Ventura’s post, this release offers the result of some very fruitful collaborations between designers and developers.

Now, let’s have a look at these improvements in detail:

One of the main objectives of the Gutenberg editor is to unify the way users insert content. The plugin, till now has gone through multiple iterations and testing; balancing clarity, usability, flexibility, and extensibility. In Gutenberg 3.0, tabs are being removed; blocks have bigger surface areas; plugins can supply a distinct color for the block icon background. All of these allow the inserter to better scale while retaining visual clarity. Also, the new concept of child blocks has been introduced in the inserter.

Gutenberg 3.0 has introduced the child blocks; a block-author can now register a block as being a child of another block by declaring parent: [ ‘block-name’ ]. The root inserter would not show child blocks unless the user is within the context of the right parent block, aiming to reduce the number of blocks shown at any given time by making the inserter more contextual.

Only under these two conditions can a block be effectively a child:

As per the perception of the Gutenberg developers, in order to have the most flexible system for styling within themes, the separation of presentational styles from structural styles is a must when it comes to individual blocks. The developers have not yet been loading presentational styles on the front-end to avoid unintentional changes to site’s appearance. However, that causes issues for new themes that would like to start working from the visual design baseline that Gutenberg offers by default. So, now, themes are allowed to opt-in to these styles with an add_theme_supprt( ‘wp-block-styles’ ) registration.

Here are a few more notable changes that came along with a long list of improvements and tweaks in Gutenberg 3.0 this time:

The Gutenberg Editor is getting better with each updated version. Also, the developers are slowly implementing new features to make it as easier as possible for users. If you haven’t tested it yet, we suggest you give it a try. If you find something that bugs you, you’re always welcome to patch things you don’t like in WordPress.