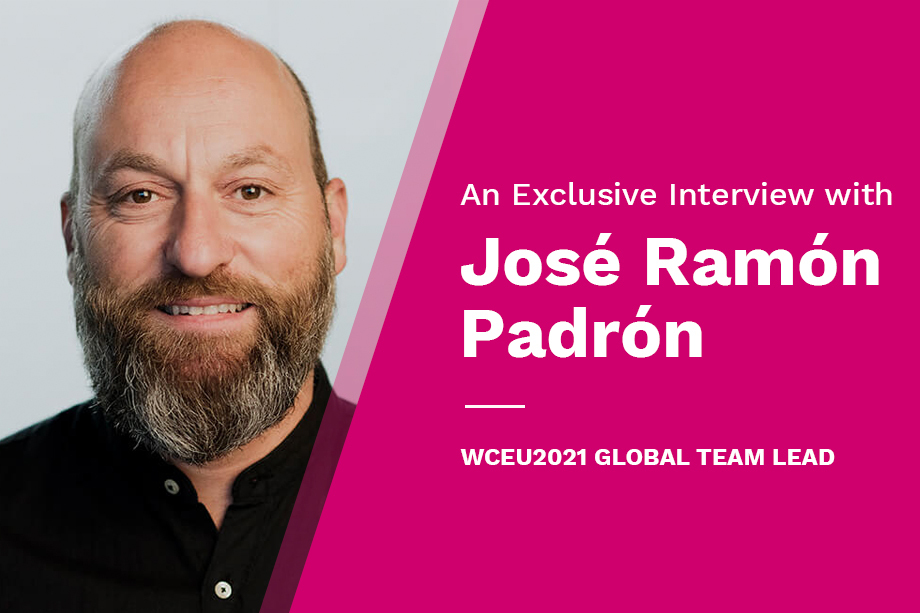 WordCamp Europe 2021 Online concluded with huge success last month on 7-9 June. This was the second edition of online WordCamp Europe and it received a lot of love and support from WordPress enthusiasts from around the world. Despite it being an online event, WCEU2021 organizers managed to pull off the event professionally with an organized system for attendees and everything went sleekly. We had the privilege of interviewing one of the WCEU2021 Global Team Leads, José Ramón Padrón.

In this interview, Mon shares about him and his experience leading WordCamp Europe 2021 Online. We would like to heartily thank José Ramón for (first) delivering such a grand phenomenon and (second) taking out time from his busy schedule for this interview.

So, with that being said, below is the full interview with José Ramón, the Global Team Lead of WordCamp Europe 2021.

Could you please introduce yourself to our audience and your role in WordPress?

Hello! My name is José Ramón Padrón, WCEU 2021 Global Lead with Lesley Molecke. I am the co-organizer for Las Palmas de Gran Canaria Meetups and WordCamps. Also, I am a Community Deputy and a WordCamp Mentor.

You were one of the Global Team Leads for WordCamp Europe 2021 Online. How did that feel?

I felt (and I’m feeling) honored because I am a big admirer of this event. The first WordPress event I ever attended was WCEU2015 in Seville. It has a great significance to me, and it was the beginning of my presence at WordPress events as an attendee and/or speaker.

Since it was an online event, were you nervous? Or maybe excited?

More than that: Anxious, edgy, excited, nervous, restless, stressed…from time to time. But the truth is that I felt most of the time: inspired, hopeful, confident, lucky, committed, devoted, and many more positive things. And that was because of the incredible organizing team we had this year. I won’t get tired of thanking them.

As a Global Team lead, what responsibilities did you carry for WCEU2021?

Our main responsibilities were assembling a strong and positive team and bringing them everything they needed for making their tasks easier. We also defined some basics regarding the event’s format, and the team did their magic creating something bigger than our initial expectations.

What do you love the most about WordCamps and bringing the WordPress communities together?

Friendship on top of everything, but also the way all of us pushing for something better and bigger. The mixture of sharing knowledge, seeing your friends, and the feeling of “no matter where you come from or who you are, you are welcome” is priceless.

While on the development phase, which sector did you feel was the most difficult to manage?

In my opinion, there are two critical points to manage: Human Resources and Creativity. During the development phase, we spent part of our time managing the coexistence of the organizers, helping to solve misunderstandings, turning the negative into positive, and giving everyone room to take decisions in common. And at the same time, we were trying to manage the workload and deadlines trying to give the organizers room and time enough to create something original and genuine.

What do you think about the team and their effort in WCEU2021?

It is not easy to express what I feel about this organizing team when I’m not using my mother tongue. But what they did reminds me in a metaphoric way, the advertisement that Ernest Shackleton (hypothetically) published in a newspaper to recruit people for his expedition to the Antarctica “People wanted for hazardous journey, small wages, bitter cold, long months of complete darkness, constant danger, safe return doubtful, honor and recognition in case of success”.

For doing this volunteer job, consuming time of your professional and private life, behind the curtains, and making all that they did for the success of the event and always keeping a good atmosphere, that means you’re made of special material. It also means you’re a great professional, a better person, respectful, hard worker, and also you make this community stronger and that you are a friend. Just in case, if it is still not clear: they did more than an amazing job and I feel honored to work with every single person on the organizing team.

Since WCEU2021 is the second edition of its kind, how is it different from the previous year?

We wanted to improve and pay special attention to the attendees’ and sponsors’ experience. At the same time, we realized and took into account that after one year from the last edition, people could be exhausted from attending online events. So, our bet was to use Hubilo as the main event platform instead of YouTube channels and Zoom rooms for networking. Also, we wanted to give the sponsors more value after a year without presential events, and on top of the virtual booths and discussion tables, we added the interviews at the main stage asking them about their experience in the WordPress Community.

Last but not least, we added the Contributor Day in the main agenda, giving the Contribution content a bigger role than in the last edition.

We know and we realize that all these changes made a difference, and we are expecting the results of the feedback survey to evaluate and have a clear picture of this new experience.

What’s the main motive behind WCEU2021? Or let’s say, what made you initiate this move?

There are two main motives for WCEU, both of them are different. First of all, we need an event to meet, contribute, share and bring new people to the WordPress community. I think this is more needed as we are still in the pandemic and most of the people are at home. And there is also a second reason: the event itself. This is a flagship event, an institution, and the biggest WordPress event worldwide in numbers. Thanks to the effort of all the organizing teams it has had since its first edition in 2013. In the same way, I don’t conceive a year without Eurovisión, I don’t conceive a year without WordCamp Europe 😉

What kind of talks do you think are more inspiring and influential at WordCamps?

I love this question. I know very well the talks selection process in WCEU because I was involved in the Content-Team from 2018 to 2020. In three years, I had time enough to understand the relationship between what people want to hear and see, what the Content-Team votes as the best talks, the logistics of the selection process, and finally what were the most voted talks. Thanks to the feedback surveys!

Would you like to send any messages to the WordPress communities who are thinking about organizing a WordCamp in this ongoing pandemic?

Don’t wait and do it now. There is no difficulty the team cannot solve. The team skills and attitude will definitely help. You’ll also receive help and support from the community. Organizing a WordCamp online or presential is an experience I recommend to everyone who likes to work in a team and for everyone that wants to do something important for his local community. Go ahead now!

Thanks for being there as an attendee, speaker, sponsor, or volunteer. People are the key, and this community is full of amazing people, so be part of it, help, share, and contribute. Being part of something so great is good for our lives and the people around us.

Thanks for the interview 🙂

We wish him all the very best for his future endeavors.

Want to know more about José? You can find him on Twitter.

You can subscribe to us for further updates and interviews regarding WordCamp Europe!