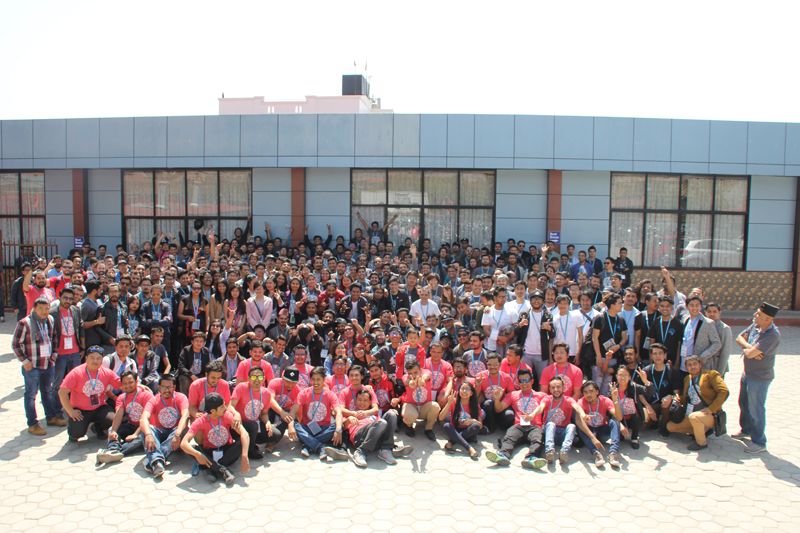 WordCamp Kathmandu 2018 took place last weekend, and it concluded with hundreds of awesome attendees. DevotePress was proud to represent WordCamp Kathmandu 2018 as the official online media partner. And we, being the official online media partner of WCKTM 2018, live-tweeted the major parts of the event. You can find them here. The two-day conference was filled with talks, interesting presentations, and fun activities outside the two halls where the conferences were scheduled. WordCamp Kathmandu 2018 has been concluded and here we have brought you a complete overview of the event that happened on March 17th-18th, 2018.

DAY ONE: THE OFFICIAL WORDCAMP DAY

The first day of WordCamp Kathmandu 2018, which is also known as the official WordCamp day started with a huge inflow of attendees in Karki Banquet, Babarmahal. Karki Banquet was an excellent choice; located in Maitighar, near Nepal Art Council, it was easily accessible. There were two halls – Hall Action and Hall Filter all set for the biggest WordPress conference of Nepal.

After the opening remarks, Mr. Sakin then introduced all the local WordPress meetup representatives and did a small Q&A session with them.

Then, the actual WordCamp Kathmandu 2018 began.

The overall quality of the presentations was excellent. As mentioned earlier, there were two halls – Hall Action and Hall Filter featuring 15 different speaker sessions including one Q&A session.

Hall Action accommodated the sessions for eight speakers throughout the day:

And, right before the closing ceremony, Arjun Singh Thakuri shared his “Success Story” with everyone in Hall Action.

Furthermore, we, the DevotePress team also had the chance to take interviews with few of the speakers and contributor day team leads; you can find them here.

Besides these, WordCamp Kathmandu 2018 also featured a group photo session after the lunch break.

The first day of WordCamp Kathmandu 2018 ended with closing remarks followed by distribution of Token of Appreciation to all the organizers, volunteers, and supporters for their time and effort.

What else is better than ending a long day of sessions at WordCamp than a happening party, right? Baje ko Sekuwa, Battisputali was served as the venue for the after-party. It provided everyone a chance to hang out with fellow attendees, explore new ideas, and network after the WordCamp.

The first ever Contributor day in the history of WordPress Nepal community was a great success with around 115 attendees. The registration started at 10 in the morning, followed by the introductory session and attendees were very positive about the first Contributor day. There were a total number of 5 teams divided for the Contributor day: Theme Review, Support, Documentation, Polyglots, and Community. All the teams were led by specific WordPressers; Theme Review team by Pratik Shrestha and Nilambar Sharma, Support team by Suwash Kunwar and Abhishek Rijal, Documentation Team by Prithu Singh Thakuri and Sandhilya Kafle, Polyglots Team by Shiva Shanker Bhatta and Sudeep Balchhaudi and Community team by Mayo Moriyama. All the attendees were seen very much involved in their respective teams and were contributing from their side.

All in all, WordCamp Kathmandu 2018 has officially ended with a huge success. The hashtag #wcktm2018 got trending on Twitter during the two-day event. WordCamp Kathmandu 2018 gave everyone a chance to meet and network with a lot of new people, and learn a lot from talks. A big thank you from DevotePress team to all the organizers and volunteers for their effort and dedication.