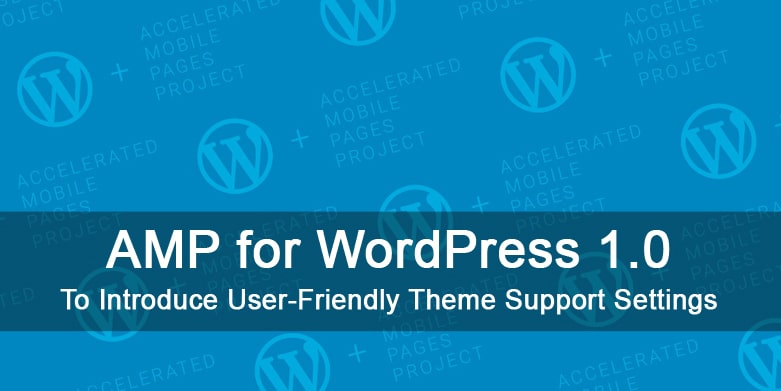 AMP for WordPress 1.0 is going to introduce user-friendly theme support settings. The update is expected to roll out in mid-September this year.

The 1.0 alpha release introduced extended AMP theme support including support for core themes, enhanced validation workflow in the compatibility tool, extended Gutenberg support and many other enhancements. The new release is basically shipping out with a more user-oriented approach to the settings. Know more about the 1.0 Alpha Release here.

AMP for WordPress, originally developed by the Automattic team is one of the earliest publishing partners on the project. The AMP (Accelerated Mobile Pages) project aims at improving the performance on the mobile devices and currently boasts usage on 25 million websites including the publishing, advertising, e-commerce and business types.

XWP in partnership with Google started to lead the development of the plugin last year beginning with the release of version 0.6. Alberto Medina, Developer Advocate at Google said, “Around May last year, my team at Google started a long-term effort with a bigger scope than just AMP, which included significantly investing engineering resources on the development of the plugin.” He further clarified that they have started investing development resources and then teamed up with XWP in order to expand the engineering scope. During this phase of the project, Google and XWP have driven all the execution of the project and the development efforts.

Weston Ruter, the tech lead at XWP said that his team went through six months of the plugin’s support topics on WordPress.org and categorized them to figure out what issues users were struggling with the most. They used that information to guide the focus for their first release and have been keeping a pulse on the support forum ever since.

Ruter also said that his team is considering implementing a wizard-type experience to minimize the number of tweaks users need to make. They are discussing automating the compatibility check of various template prior to enabling theme support so users can get a high-level view of the areas of the site that would be best-suited for AMP.

The very first few versions of AMP for WordPress were more developer-centric, requiring edits to themes and child themes to configure template support. It was very complicated for heavily customized installations as it required site owners to invest considerable effort into optimizing AMP pages and fine-tuning them for their needs.

The 1.0 release will allow users to have a native AMP site that excludes certain templates, such as a shopping cart or a category archive, from being served as AMP.

Below are a few notable updates in the alpha and beta releases:

The AMP for WordPress plugin is becoming more of a plug-and-play solution as development progresses. So, if you haven’t already, we recommend you try out the plugin today and give your feedback.

Note that AMP for WordPress v1.0-beta2 is not yet ready for production sites.