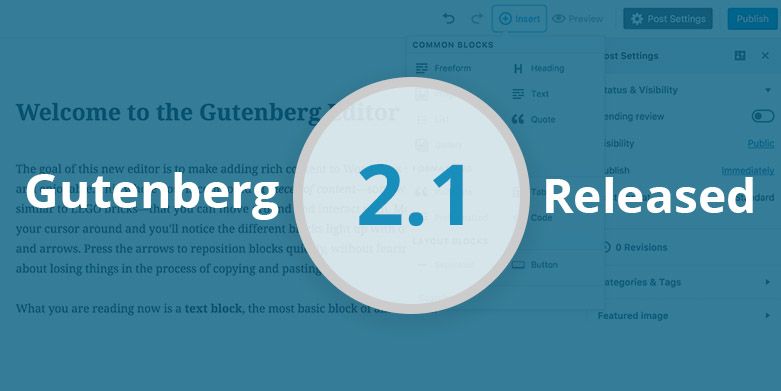 The new version of the Gutenberg Editor – Gutenberg 2.1 has been released. The updated version was released yesterday with few changes in design, writing flow details and some tiny tweaks in the editor.

The changelog had a full list of more than 50 improvements in Gutenberg 2.1 this time. The release has emphasized on some design and writing flow details—lighter up/down movers, engaging the UI-less focus mode more often, and more. Gutenberg 2.1 has also brought many extensibility API improvements, exposing internal editor state through selectors, enhancements to the meta-box handling and implements the “Copy All” button as if it was a plugin as an example of how to leverage native hooks.

Now, let’s have a closer look at the changes in Gutenberg 2.1.

Gutenberg 2.1 has iterated on the design of up/down arrows and how the focus is managed. The main aim of this patch is to reduce the visual and cognitive weight of the up/down movers. And the reason behind this patch was that Gutenberg had received a lot of fair feedback around the UI feeling distracting and impacting the writing flow. It is a part of an ongoing effort to improve the writing flow by refining the UI.

The updated editor shows immediate visual feedback when dragging and dropping images into the editor. The image/gallery block is immediately appended and the URL is updated once the upload completes. It is similar to the behavior we have while uploading the image from the block itself.

Apart from these improvements, Gutenberg 2.1 also introduced many other enhancements and some of them are listed below:

Check out the full list of changelog to know more about the enhancements in Gutenberg 2.1.

The Gutenberg developers are looking forward to finalizing the nested block’s interface (with its own Columns component), some remaining important extensibility hooks for plugins, and adding drag-drop functionality for moving and inserting blocks.