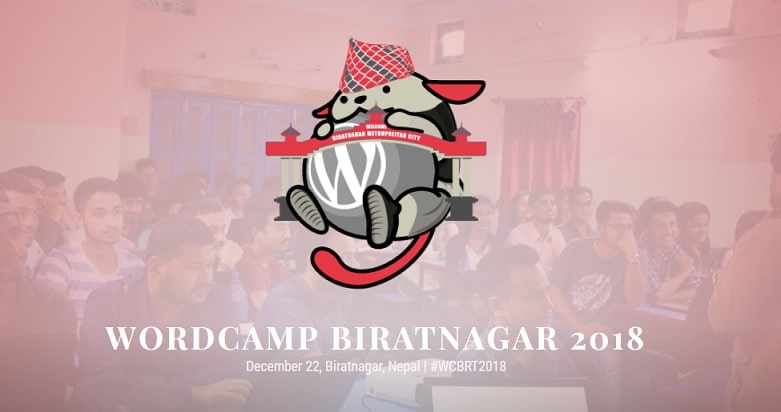 WordCamps are locally-organized, non-profit annual conferences covering everything related to WordPress. It brings together various WordPress community members from all over the world at a commonplace. It definitely provides a chance to share insights and experiences, do business, make connections and talk about WordPress. Matt Mullenweg, the co-founder of WordPress was the first to organize the first WordCamp in San Francisco. And, since then, local communities have organized their own WordCamps in their own hometowns. Also, the frequency of WordCamps has been gradually increasing each year with thousands of growing WordPress enthusiasts around the globe.

WordPress Biratnagar is one of the thousands of growing WordPress communities. The community has been gradually growing since its inception. And we are very happy that the community is going to organize its first WordCamp soon in the city.

WordCamp Biratnagar is going to be a full-day WordPress conference with multiple talking sessions on both technical & business topics related to WordPress. The organizers are putting in all their effort and hard work to make the event grand and a one to remember. They’ve invited many renowned WordPress experts to deliver lectures and participate in the panel discussions. The sessions in WordCamp Biratnagar 2018 will be covering various subjects that are useful for both newbies and advanced users & developers of WordPress.

Visit the official website of WordCamp Biratnagar 2018 to learn more about the ongoing preparation for the first WordPress extravaganza in Biratnagar. You can subscribe using the form available on the website to stay updated on the most recent news from the WordCamp Biratnagar team.

A limited number of seats are available as ‘Early Bird Tickets’ at NPR. 1000 and once the early bird tickets are finished, the regular ticket price will be marked NPR. 1500. The ticket price will get you a full day of WordPress nerdery along with some nice swags, lunch, snacks, a WordCamp T-shirt, and the after-party, of course.