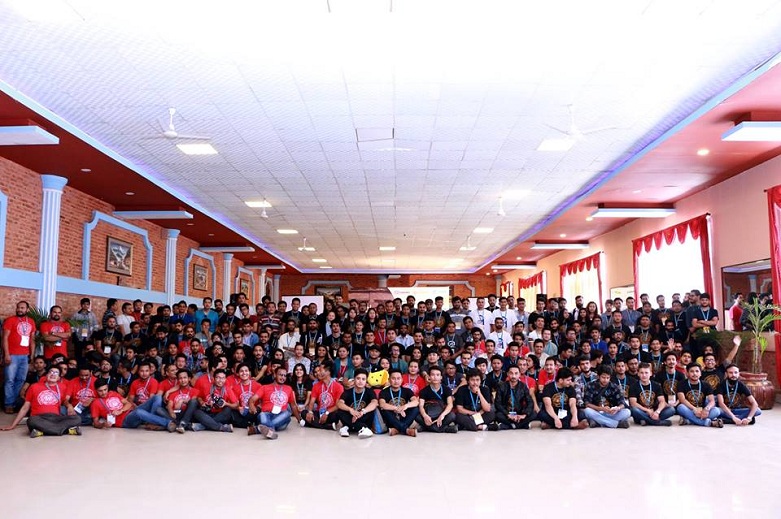 This past Saturday, May 20, WordCamp Kathmandu 2017 took place. And, it was great! It’s interesting to point out that this edition was organized only six months after than the previous one. The organizers had to do some major backbreaking work in that time span. However, their hard work and dedication paid off. The venue was great. The people were fantastic. The talks were informative. Everything was well-organized. It is safe to say that the event was a great success.

We, being the official online media partner of WCKTM 2017, live tweeted the major parts of the event. You can find them here. But, we wanted to write a more detailed account of the event so that people who missed it can get the gist of the day by reading it. So, let’s begin!

Karki Banquet was an excellent choice. Located in Maitighar, it was easily accessible. It had ample parking space with round the clock security. A large tent was erected where the sponsor tables were set. Even the two halls, namely Hall Action and Hall Filter, were spacious and had numerous ceiling fans. Now that we are in the peak of summer, they were undoubtedly lifesavers.

The registration hour was manic. As soon as the clock struck 9, people started pouring in. The organizers and volunteers barely had time to catch their breath. And, if you’re familiar with the drill of WordCamps, then you know post-registration is the time for swags. So, right after registering, attendees flooded in, hopping from one sponsor table to another before they ran out of swags.

From what we saw, the most popular tables were of WooCommerce, Web Experts Nepal, and Catch Internet. These three sponsors had an array of goodies with them. The most interesting ones were pop sockets and biodegradable bags from WooCommerce, and Catch Internet’s cups and t-shirts. Interestingly, the team Catch Internet brought a “Spin to Win” wheel with them. Rather than the usual come-and-take-swags, attendees spun the wheel and got what the pointer landed on. It added to the festivity of the WordCamp. Unsurprisingly, the cups and t-shirts were the most-sought after swags.

Then followed opening remarks by the lead organizer, Yam Bahadur Chhetri. He welcomed the attendees and thanked the sponsors, organizers, and volunteers. Next, Biplab Subedi, speaker wrangler, walked us through the history of WordPress Nepal in brief. After ending his speech, the three founding members of WordPress Nepal – Ujwal Thapa, Sakin Shrestha, and Chandra Maharzan – were honored for their contribution to the community.

Then, the actual WordCamp Kathmandu 2017 began.

Talking about the presentations, the overall quality was excellent. The day featured 13 different speakers along with a workshop. Hall Action accommodated the sessions from the following speakers:

On the other hand, Hall Filter housed the following presentations:

At the end of his presentation, Sakin made a big announcement that WordCamp Kathmandu 2018 will have a Contributor Day. WordPress is an open source. It is rare for an open source software to last more than a decade. WordPress has not only managed to stand the test of time, it has also grown bigger and better. It is all because of contributions from WordPressers. And, in Contributor Day, WordPressers gather in a room and sit down to do contribute back. This is a huge win for the community.

All in all, the speakers were really good, and their content was current, relevant, and helpful. Everything has been recorded. You can expect to catch up on WordPress.tv soon.

Alina Kakshapati: Project Management – How do we do it!

Sunil Bajracharya: The Power of Support and Product Ratings

Kat Christofer: How WordPress Made My Dreams Come True

Muhammad Adnan: Getting Started with React

Narayan Koirala: How Secure is WordPress

Token of Love and Certificates

Besides these, there was a photography competition where attendees could upload photographs during the WordCamp with the hashtag #WCKTM2017 in their social media accounts and be eligible for exciting hampers. Also, there were Lucky Draw announcements where the sponsor tables handed out gift hampers to the lucky attendees.

WordCamp Kathmandu 2017 officially ended with closing remarks by Utsav Singh Rathour. For their time and effort, All of the organizers, volunteers, and supporters received a Token of Appreciation.

And nothing’s better than ending a long day of sessions at WordCamp than with an after-party. Moksh Bar, Jhamsikhel served as the venue for the after-party. It provided a chance to hang out with other attendees, explore new ideas, build camaraderie, and network after the WordCamp.

In summary, WordCamp Kathmandu 2017, with the attendance of 241 attendees, was a great success. We got a chance to meet a lot of new people, talk to others in our community, and learn a lot from talks. Most importantly, others inspired us to work on ourselves and to give back to the community. We’d like to thank all the organizers and volunteers for making WordCamp Kathmandu 2017 a reality.

1 thought on “WordCamp Kathmandu 2017: An Overview”