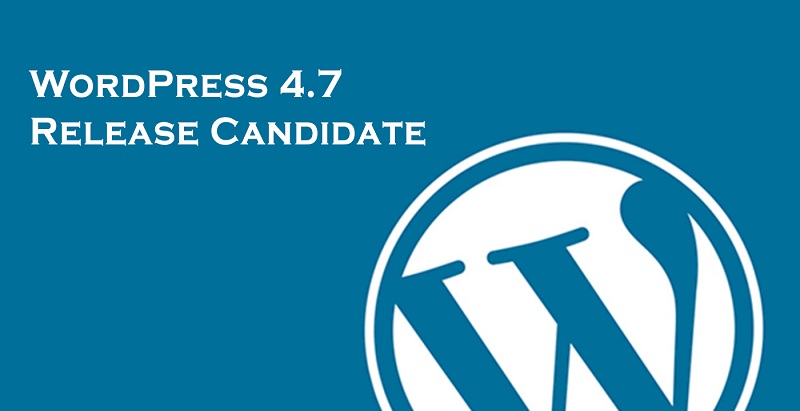 As the final release date of WordPress 4.7 is approaching fast, the development team made the WordPress 4.7 release candidate available for download today on WordPress.org.

A release candidate, or simply RC, signifies that the core development team is almost done. And, the team is aware that with millions of users and thousands of plugins and themes, they might have missed something. So, they’ve asked the users to test the platform for any available errors and notify the authors, if any occur.

WordPress 4.7 is going to a big release, with a number of features focused on first-timers. Highlights include a new default theme, video headers, custom CSS, customizer edit shortcuts, PDF thumbnail previews, user admin languages, REST API content endpoints, post type templates, and more. 4 betas have been released, with WordPress 4.7 Beta 4 being released only a week ago. They allowed the users to test the features of WordPress 4.7, see what is new and learn its advantages and disadvantages ahead of its final version.

So, if you haven’t tested 4.7 yet, now is the time! To test WordPress 4.7, you can use the WordPress Beta Tester plugin or you can download the release candidate here (zip).

If you think you’ve found a bug, please post to the Alpha/Beta support forum so that the development can ship WordPress 4.7 on Tuesday, December 6. If any known issues come up, you’ll be able to find them here.

Developers have been urged to test their plugins and themes against WordPress 4.7 and update their plugin’s Tested up to the version in the readme to 4.7. If compatibility problems are found, please be sure to post to the support forums so the team can figure those out before the final release. An in-depth field guide to developer-focused changes is coming soon on the core development blog.

Let’s wait for the final release together!