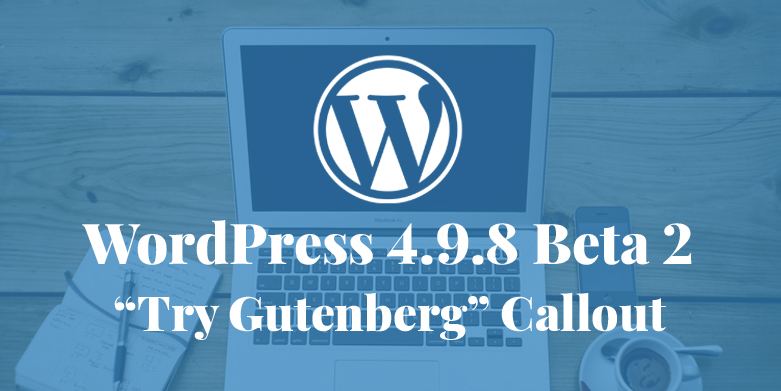 Only 2 days after the release of the first beta, WordPress 4.9.8 Beta 2 was released yesterday for the general public to test. The most important update here is the newly included “Try Gutenberg” callout.

Since the software is still in development mode, it’s best that you don’t run it on a production site. Consider setting up a test site just to play with the new version. To test WordPress 4.9.8, try the WordPress Beta Tester plugin (you’ll want “point release nightlies”).

As mentioned earlier, the most notable change that WordPress 4.9.8 Beta 2 has brought is the “Try Gutenberg” callout. The callout will appear in user dashboards after the official release rolls out at the end of this month.

The callout focuses on getting more eyes on the Gutenberg editor and try the new Gutenberg editing experience before the official release. After discussing the designs and wording for the callout, the WordPress contributors have finally rolled out the outlook that you’d see in 4.9.8 Beta 2. Below is the preview that you’re likely to see on your dashboard.

The ‘Try Gutenberg’ callout also informs the users that the new editor will be enabled by default in the next major release of WordPress even if they don’t get involved in Gutenberg testing. The callout has included a link to the Gutenberg information page in order to help users learn more about the Gutenberg editor.

Below are the bug fixes and enhancements included in WordPress 4.9.8 Beta 2 release.